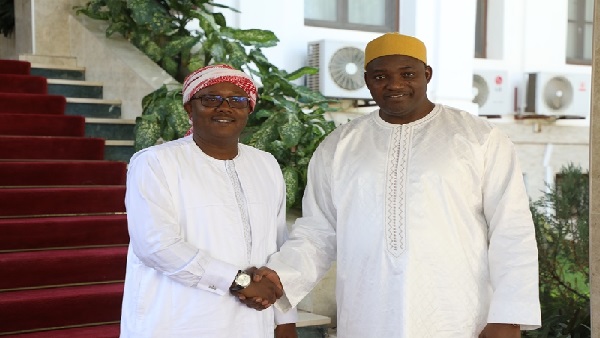 The President-elect of Guinea Bissau, Umaro Cissoko Emballo, has reaffirmed his commitment to a borderless sub regional bloc of Dakar, Bissau and Banjul, that will be “a no laissez-passer zone for its citizens.”

President Cissoko Emballo, who was elected last month, met President Barrow at State House yesterday: “The Gambia and Bissau are not only neighbours but closer than that and I will make it my priority to further those relegations. Once I am inaugurated, we do not want any Laissez-passe between Banjul and Bissau. We want no borders between our citizens. This is my own decision,” he said.
At bilateral levels, he said cooperation on education, culture between Bissau and Banjul will be further strengthened.

“Bissau has a lot to do in those areas with Banjul, and we are ready to learn from Gambia’s business experiences as well as strengthened security cooperation.”
President Emballo guarantees that better prospects lie ahead of Guinea Bissau as a country, following years of political instability. “The new generation of Bissau Guineans will not repeat mistakes that keep their population in cycle of conflict for decades,” he added.
The President-elect however expressed belief that the trilateral relations between the three countries and their presidents give better hopes for the journey ahead.

He said the visit was “a personal one” and he is in Banjul to thank President Barrow who he described as a “big brother” both at personal level and as President of The Gambia.