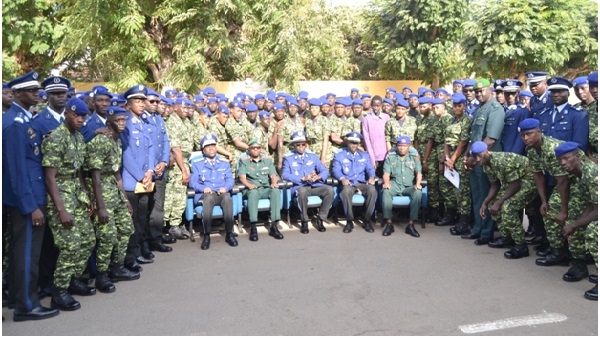 One hundred and fifty army personnel who left for training as part of Gambia’s new presidential guard project have returned to the country.
The men and women of the State Guards Battalion completed a five-month training on VIP protection conducted by the School of National Gendarmerie in Senegal.
This was the second batch to undergo training in Senegal.

The curriculum of the training conducted in Fatick and Dakar included topics relating to intervention techniques, VIP protection, rappelling techniques, ethics and dermatology, civil right and public freedom and public order management among others.
A delegation headed by the director of training of the Gambia Armed Forces, (GAF) Colonel Sait Njie and other senior officers attended the graduation ceremony of the new guards in the Senegalese capital.

According to Col. Njie, the 5-month ‘rigorous’ training dubbed CDS Training Directive for 2019, was in line with the transformation agenda of the GAF, which is to attain its defense reforms under civilian authority.

Colonel Njie used the occasion to pay respect to the security and bilateral ties between Banjul and Dakar. “By all indications, the training has been very successful as it would not only lift the morale of the personnel by adding more impetus to their profession but prepare them better to provide adequate security to the head of state, his family and the citizens,” he stated.

Colonel Oumar Diouf, commander of the Senegalese Gendarmerie, ordered the troops to manifest “a high sense of diligence and hard work” in the execution of their constitutional mandates.

The training was conducted by the school of Deputy Office of the National Gendarmerie in Fatick, and the centre Improvement of the Mobil Gendarmerie in Dakar.
It is expected that this batch soon joins the previous one that underwent a similar training program in Senegal.

These elite troops will ultimately be in charge of the security of the president and the State House when Ecomig leaves The Gambia.
Other senior members of the Gambian delegation were Lt. Col. Kuluteh Manneh, operations officer, State Guards, Major Abdoulie Jobe, chief instructor, GAF training school, and Lt. Malick Sanyang, deputy director of press and public relations.