New York rally calls for stop of deportation of Gambian 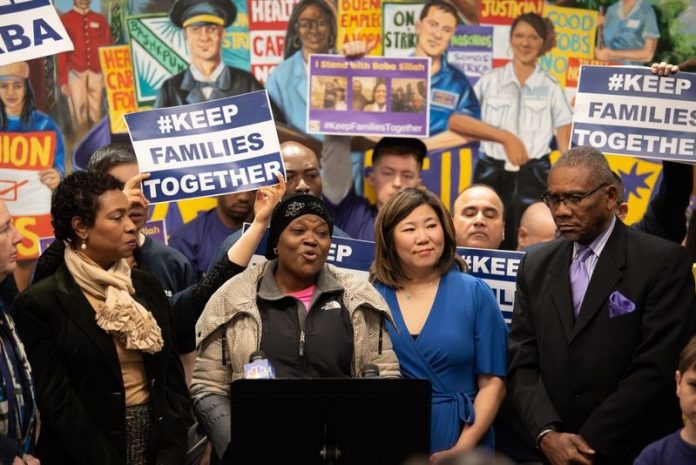 Elected officials, labour leaders, friends and family members gathered this week in New York to stop the deportation of their beloved community member Baba Sillah to his native The Gambia.
At a news conference on Monday, they called on US Immigration and Customs Enforcement officers to let Sillah rejoin his family. Sillah who has lived in the US since 1993, was detained by ICE officers on January 31 during a routine check-in at federal immigration offices in New York city.

“The inhuman policies and practices of this administration continue to punish good people like Baba, and hurt US citizens like his wife Mamou and their five children, and we will fight again and again until we can stop family separation as a matter of course,” said Héctor Figueroa.

“We are here for this family, but we are also here for all our co-workers and neighbors in families who are being terrorised and under threat of unjust separation.”
Sillah has worked as a porter on the Upper East Side since 2006. He has a pending application for a green card and is married to US citizen Mamou Drame Sillah. He has five children (Ebrihima, 16; Aminata, 10; Isha, 4; and Fatima, 9 months) who were all born in US with one of them (whose name wasn’t disclosed) currently living in Senegal. Mamou pleaded to authorities to let their kids see their father again.

“When Baba called me from JFK, minutes before he was supposed to board a plane away from us, he had given up. I was scared too, but I told him, it’s not time yet,” said Mamou, holding the couple’s nine-month-old daughter Fatima. “Thank God, the hard work of so many people, the lawyers and our unions and elected officials, meant that he was able to remain in the U.S. I’m not working because Baba took care of the kids in the day, and I did at night. They miss him, and he misses them.”

Two weeks ago Sillah’s family, the imam at his mosque and elected officials rallied outside of 26 Federal Plaza in lower Manhattan, New York, to call for his release. Authorities took Sillah from his cell at Hudson with plans to deport him that night, but he was granted a last minute stay after lawyers at the NSC Community Legal Defence got involved.