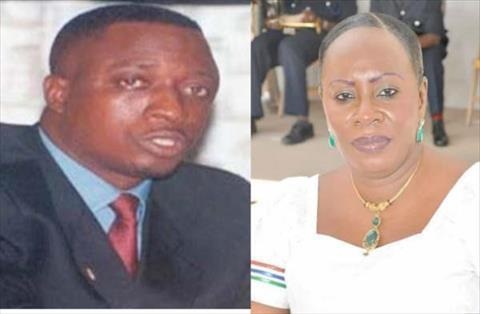 Alagie Kanyi, a former private soldier who confessed to at least 9 killings connected to the November 11 abortive coup, has told the Kanifing Magistrates’ Court that former junta member Yankuba Touray told him that the November 11 coup plotters had danced to their own tunes.

Touray and former speaker Fatoumata Jahumpa Ceesay are standing trial for allegedly interfering with TRRC witness Kanyi, who claimed they both called him asking him not to tell anything to the commission.
Giving evidence at the trial Friday, Kanyi told the court that during the telephone call with Yankuba Touray, the former junta member told him that the soldiers who were involved in the November 11 coup plot had got what they deserved because they would have killed the junta members if they had succeeded. Kanyi further said Yankuba Touray also told him that he must not tell anything to the commission about what happened at his house.

“The following day I called him and informed him that as far as he is our commander, he should face the TRRC first so that we can learn from him but he told me not to mind,” Kanyi told the court.
Both Yankuba and FJC deny any wrongdoing and were granted a bail with a million dalasi and two Gambian sureties.

Testifying on FJC, Kanyi said the former speaker had claimed that she once met him at Edward Singhatey’s house.
“She even asked me whether I was an orderly of Edward Singhatey and I told her I was never Edward’s orderly. She went on to tell me that she has just spoken to Yankuba Touray who gave her my number to call me and inquire whether I was called by the TRRC. I told her I was called and asked about the November 11 incident. She told me not to mind the TRRC and urged me to be doing good things for my mother so that she will pray for me,” Kanyi told the court.

He said FJC further told him that she was travelling to Dakar and that when she comes back, she would send him something to help himself.
“Our conversation stopped there when she cut off the call. I called her back and thanked her for the good advice. I asked her to advise me because the TRRC is not easy,” Kanyi added.

The witness maintained that the telephone conversation was the first and only time he communicated with Fatoumata Jahumpa Ceesay.
Hearings resume on 2 April.