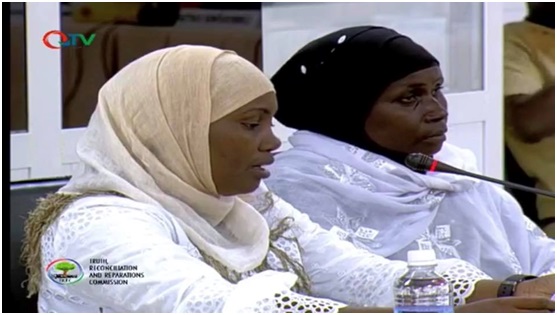 The widows of Lieutenant Basirou Barrow, Sunkari Yarbou and Mariama Marong – Baldeh yesterday faced the TRRC to share their ordeal since the execution of their husband by the AFPRC junta in November 1994.
The widows, who testified simultaneously before the commission claimed they have been living in tears since their husband was executed on 11 November 1994 along with other officers accused of being part of a coup.

“Today I can tell Gambians that my husband, Lt Basirou Barrow was a great and brave soldier who loved his country. He lawfully served his country and his people but he was unlawfully, unjustifiably and inhumanly executed by Jammeh and his junta members. We were all terrified when it was announced on the radio by the council that there were soldiers who wanted to overthrow the government and as a result some soldiers were arrested while others lost their lives. On behalf of the Barrow family we request for his remains to be exhumed for a befitting burial,” Mariama Marong-Baldeh, the second widow told the commission in her moving testimony.

The witnesses whose testimonies were interspersed with mourning and weeping described their husband as a “loving and honest man” whose aim was for the junta to hand over the country to the civilians and return to barracks after six months but was betrayed by the members who failed their promises.
“I never saw my husband since he left for work on the eve of 11 November 1994. It was when people later started visiting our home inquiring about my husband, so I went out to search for him. I found people at Westfield listening to BBC saying Lt Basirou Barrow was killed, I could not believe it when I heard that , it was a difficult moment for me , only Allah knows what I felt that day when I went out to search for my husband ,” Sunkari said.

The widows, who were praised by the commission for their courage and determination, emotionally told the commission that since the demise of their husband they continued to struggle for their lives and also coping emotional difficulties.
The officers, they went further visited their home days later after the demise of their husband to collect his military kits on the pretext that they came to express their sympathy with them, further testifying that they were also interrogated by the NIA officials who accused their husband of sacrificing a black cow before the alleged coup.
Sittings continue today.