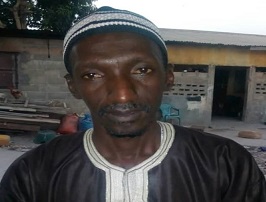 The spokesman of the National Reconciliation Party (NRP) has claimed that his party is “the founding father of Coalition 2016” that ousted President Jammeh.
Pateh Baldeh told The Standard yesterday: “I want all Gambians to know that NRP is the founding father of the coalition. We initiated it. We started in 2015. I personally approached the Minority Leader [Samba Jallow of NRP] in his office, and we wrote the letter to all the political parties to invite them to a meeting in our office, so that we can prepare the ground.”

“All the opposition parties, except PDOIS, sent their representatives to attend that meeting including one independent Kebba Singhateh. PDOIS contacted us to tell us that they were going on a tour. Then we decided to go ahead with the meeting.
“At that meeting, we formed the inter-party committee for the unification of opposition parties. The late Solo Sandeng of UDP played an active role but NRP is the founding father of 2016 Coalition.

“Everyone welcomed the idea. The party leaders and their grassroots followers accepted that we should have one force against Jammeh because then Gambian people had realised that without forming the coalition, no individual party could remove Jammeh.”

MoU vs Constitution
Asked about his party’s stance on the three-year versus five-year term debate for President Barrow, Pateh stated: “As far as the NRP is concerned, we are not a party to calls for President Barrow to step down after three years. We have sensitised our members and supporters not to engage in any demonstration calling for three years.

“We are not encouraging anyone to even discuss with them. NRP will not be a party to any demonstration calling on Barrow to step down after three years. When we were making this coalition we did it in peaceful way and as a party, we will continue to remain peaceful.
“So as of now, our militants have been consulted at the grassroots and party executives level. Even at our congress, we have mentioned it there that we should allow Barrow to go for five years. After five years, each party can go and contest on your own.

“As far as NRP is concerned, we are appealing to every Gambian and other party militants to go for the constitutional provision which says five years, and then we go for elections. Let us all work and achieve our development and reforms objectives. For example, we need a lands commission and the repeal of draconian media laws.

“We are in a young democracy and everybody is enjoying today. People are free to say anything they want to say without fear of being arrested, and we want that to continue with or without President Barrow after five years. I sacrificed my life for this country. So I would not allow anything that will destroy the peace and stability of the country. Gambians should show patience and wait until the end of Barrow’s five years. Five years is just at the corner.”