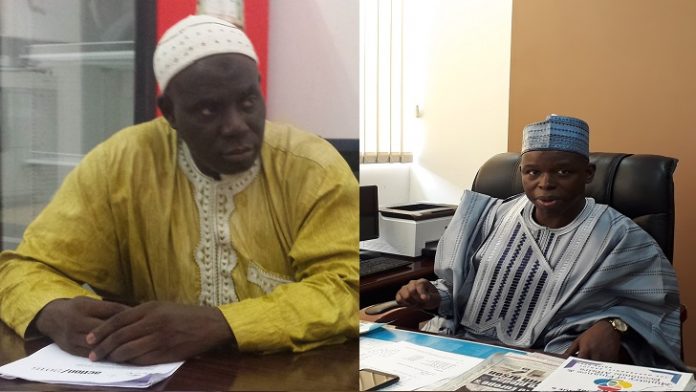 A day after the Majority Leader KK Barrow led calls for a resolution to revoke the president’s decision to remove nominated member Yakumba Jaiteh of the UDP, the Minority Leader Samba Jallow of the NRP yesterday called a press conference with a number of members to disassociate themselves from the resolution.
Speaking at the press conference, Hon Samba Jallow clarified that his office together with scores of other parliamentarians are not for or against the revocation of Hon Ya Kumba Jaiteh’s nomination because the issue is an ambiguity or an argument over a constitutional provision or power.

He said when they got the news about the revocation of Hon Jaiteh’s nomination, as a tradition, the Majority Leader, in consultation with his office suggested an all-party caucus meeting.
“The resolution read by the Majority Leader of the assembly, at the end of the All-party caucus yesterday, is not binding and does not necessarily represent the decision of the Assembly in Chamber,” he said.

He continued: “If the resolution was intended to have the backing of the Assembly, it should have been drafted in proper motion form, condemning the act, and submitted to the clerk of the National Assembly for it to be included in the business of the Assembly in the forthcoming session, next month. However, the effect of such kind of a motion is limited, because the issue at hand is about a constitutional provision, which has a competent authority to deal with.”

Hon Jallow further said that on the legality of the act, “precisely, section 127 (1) (a) of the 1997 Constitution provides that the Supreme Court has the exclusive original jurisdiction for the interpretation or enforcement of any provision of the constitution.
“For me and some of my Honourable colleagues, our position at the caucus was for us to seek legal advice or opinion from the AG Chambers. Therefore, we may know the next line of action to be taken as a national assembly. The national assembly has powers to hold the executive to account but not in this way where there is ambiguity in a constitutional provision or power.”

He said the person affected is a nominated member and that the NAMs should be very careful of how they deal with the issue because the person who nominated her can give reasons why he revoked her nomination.
“This is about a revocation of nomination and not dismissal.

“They were misguided. When these five people were nominated by the president and sent to the assembly the only thing that they did was just to go and swear directly. We never raised a motion to approve their nomination. To say that national assembly members have to approve them after the nomination of the president is totally misguided,” he added.