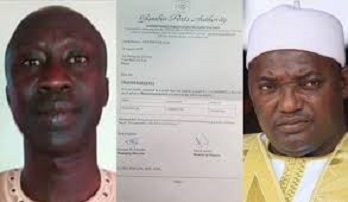 The Act creating the corporate entity known as The Gambia Ports Authority (GPA) is the law that governs the management of the corporation to provide a vital service to the economy and to the general public for PROFIT.

It is certainly not a charity organization and thus the reason for it to be designated as a State Owned Enterprise.

It is therefore not surprising that you will comb the entire GPA Act and you will not find any reference to CSR (Corporate Social Responsibility).

It is, therefore, contrary to the provisions of the Act.

In short, management cannot, and should, therefore, not engage in CSR. Privately owned enterprises, on the other hand, are at liberty to use portions of their profits for CSR projects. SoEs are not supposed to engage in such projects because they are prohibited BY LAW.

The Managing Director’s claimed that “the appropriate governance procedures were followed at the level of the Ministry of Finance and the GPA Board of Directors.”

He then tagged on the following curious phrase “…and decision was obtained for the relevant payments to be offset against the liability that the GPA owes to Government…”. Approval from whom?
From the above, the MD is not sure whether to go the CSR route, which contravenes the Act or the offset route ie treat the payments as offsets against their external loan service, so he states both. Which is which? It can only be one or the other.

But it cannot be both. Ultimately, it really doesn’t matter because both are wrong and illegal.

If we assume that the Board authorized the MD to approach the Finance Minister to treat the payments to the local contractor as offset to GPA’s external loan obligations, and if the Finance Minister approves the MD’s proposal, he is contravening the Finance and Audit Act by accepting real fungible funds be lodged in the CRF. No IOUs, please.

I must say, the press release is not explicit on neither the Board’s nor the Finance Minister’s approval of the methods employed by the MD which we insist are flawed and illegal in both the CSR and offsetting arrangement.

I encourage the Finance Minister, the Board of Directors of GPA and the Managing Director on any aspect of the press release which I find bizarre, at best.