The Rotary Club of Bijilo Tuesterday donated “essential” medical consumables to the country’s central drug store in Kotu.
The donated items which include high power restricted oramorph morphine liquid, oxycodone tablets, oxynorm liquid, Ventolin and simvastatin among many are designed to boost government’s efforts in bringing health care delivery to every Gambian.

They were brought by Brits Ms Anne Corby and Bev Hawkins, both members of the club.
Mrs Anne said she is aware that some of these consumables are not available here in The Gambia.
“Therefore, it would help those who are particularly suffering from severe pain,” she told The Standard.
Bev Hawkins, who said she has been bringing medications to The Gambia for the last three years, said the people of Gambia can continue to expect more consumables from them, through their Rotary club.
She said: “As the initiative is getting bigger with nursing homes and other people donating the drugs, it can be a big process. This is why we come directly to the Ministry of Health [central drug store] because we feel they can distribute these drugs to the needy places.”

Club president Banky Njie gave a brief background of the new Bijilo Rotary Club in the country, adding that they have only recently been chartered.
“But we are proud of our achievements in helping alleviate the strain and challenges that we face in this country in terms of drugs,” he said. “These are essential drugs. Although it’s not much but every little goes a long way.”

Speaker after speaker, the health officials of the central drug store thanked the Rotarians, and urged that ‘let this be the first and not the last’ the Club comes to their aid. 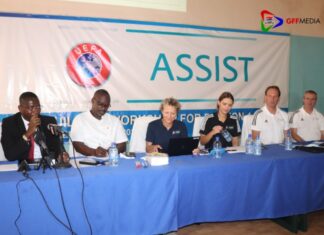 September 21, 2021
In its quest to transform the national league from its current amateur status to professional, The Gambia Football Federation (GFF) started a four-day capacity...