Salma Conteh aka Salma Slims, Lang Conteh’s daughter who is US rap queen 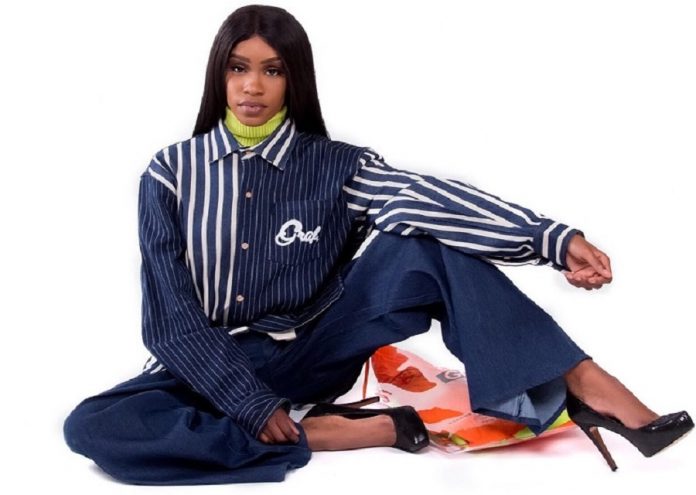 Twenty-five year old Atlanta rapper Salma Conteh who goes by the artiste moniker Salma Slims has become “First Lady” of Private Club Records. She is known for her hit singles Who Is Salma Slims and The Diary of Salma Slims among others.
As the first lady of Private Club Records, the Don’t Act rapper has been carving her own path when it comes to music, fashion, personality and female empowerment. With her upcoming debut, Runway Rapper, fans will finally be able to get to know real name Salma Conteh on a personal level, from her upbringing with Muslim parents to her love for fashion to her journey from rap group member to solo artist. Salma who is the daughter of Lang Conteh of Central Bank of The Gambia/Camelot Boutique fame, has been creating music since she was 16.

In a recent interview she talked about a potpourri of things. Excerpts:
“I studied so many female rappers from Eve to Foxy to Da Brat … I fit into that,” she says. “Growing up being in a female rap group, doing cyphers and coming from that boom-bap, backpack hip-hop lane, hip-hop now needs to shift. Apart from social media, because there’s so many female rappers that have gone viral off of one thing (Worldstar or whatever the case is). Real lyrics, bars and content is where I fit in, coming into that.”
The name Salma Slims comes from her cheerleading days in high school, when peers couldn’t pronounce her real name. Because of her tiny frame, they went with “Slims.” This was back in Atlanta.

At 17, Salma and the other two members had met with LA Reid and almost signed a deal with Epic Records. Being in a group at such a young age, obviously, sometimes things don’t work out as planned. Moving to Los Angeles three years ago with husband 24Hrs, Salma is fully reaping the benefits of residing in the mecca of both fashion and entertainment.
“Touching bases in LA is definitely very important — especially for female artists, if they want to step into the fashion lane and don’t have a chance to go overseas,” she says. “A lot of up-and-coming artists, we don’t really have a lot of money to do a lot. It’s underground, independent, funding everything yourself. LA is a big fashion market for everyone to get their feet wet. Brands they sell in Europe are super accessible out here, so it’s a real easy market to tap into both lanes.”

“I have so much,” she says. “I built my own world and have my own aesthetic I stick to. Apart from the fashion and the weirdness that goes on around me visually, I’ve been through so many different situations that a lot of girls can be like, ‘Damn, I went through that, too.’ Even having my parents — I’m Muslim. Growing up, hip-hop wasn’t a thing. It was a binge to go and listen to these artists. Being a girl from the ghetto, whose parents are immigrants and having to deal with so many things in the ‘hood, it’s a story within a story, within a story.

“Even if I don’t showcase that online — because of the world I’m in — it’s all in the music. I want people to take from the story. I have so many messages and positive energy I want to give off to women,” Slims adds. “Especially right now, a lot of women are very insecure about things. They want to do certain things, everybody is for somebody, this person might not like this artist because they haven’t been through that. I want people to take in the message and positivity that comes from my music and bring it into their lives.”

Another thing very dear to Slims is her stance on female empowerment, which is driven and fueled by her father’s journey being locked up under a dictatorship in Gambia.
“My dad just came home from prison,” Slims says. “We had a president who was a super dictator, my dad was working with him on a business. He had a nightclub and recording studio in a mall in The Gambia. He was such a dictator, he didn’t even want to see anyone else’s success come out of it. ‘You stole money, you did this and that.’ My dad came out of that whole thing recently, it’s been four or five years.

“We finally got the dictator gone for good. They’ve been having military coups planned for him for two to 14 years, trying to figure it out. My dad’s finally home. He got his properties back and everything. He keeps me going and motivated. To see his success and everything he did for Gambia motivates me to keep going as an artist. I could’ve been born in Gambia and not have as many opportunities, but being born here in America, that keeps me going. Just follow the dream at the end of the day.”
With Runway Rapper dropping any day now, Salma leaves us with some words of wisdom for anyone aspiring to follow in her footsteps.
“vocal, that’s the main thing.”