SCORPIONS ARRIVE FOR RUMBLE IN THE JUNGLE 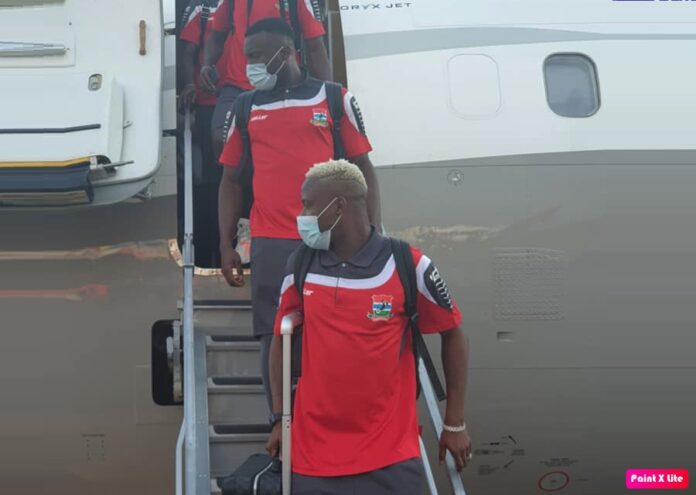 Like Mohamed Ali in 1974, The Gambia national team, the Scorpions have landed in Kinshasa for rumble in the Jungle- to complete the Africa Cup of Nations qualifiers with a match that is purely academical after the Gambia and Gabon assume an unassailable 10-point lead and a ticket to the finals in Cameroun.  Only that the George Foreman in this fight is host DR Congo, initially a hot favourite in the group now reduced to third place with a wounded pride of missing out on the Afcon.  Will the Congolese invest too much interest in the match today?

On the other hand, a win for the Scorpions can boost the Gambia’s ranking with its multiple effects in future. So, Coach Saintfiet and his boys, now slightly reshuffled with new faces will not lift their feet on the gas in their quest to take first position in the group from Gabon who are away to Angola.

With DR Congo already eliminated from the race, the country’s red devils may not be on all cylinders when they take on the Gambia today which will be even rosier for The Gambia which has hardly finished celebrating her first Afcon.

Regardless of whether Gambia can improve on the qualification to finish as group winners, this week marked the biggest moment in Gambia’s history.

With each member of this squad 31 years or below and some of them competing in European football’s top leagues, there is growing expectation that they may be able to reach the knockout stages later this year.

Also, The Gambia effectively took the place of Congo DR, a nation who reached the semi-finals in 2015 and have qualified for the last four tournaments.

The Leopards twice let slip leads against Gambia in the reverse fixture, conceding a last-minute equaliser which ultimately changed the course of this group.

Their 3-0 defeat in Gabon earlier this week has inevitably led to question marks emerging regarding the long-term future of head coach Christian Nsengi-Biembe.

While success on Monday would count for nothing in terms of their finishing position, it may be what is required to ensure that the 58-year-old remains at the helm in the long term.