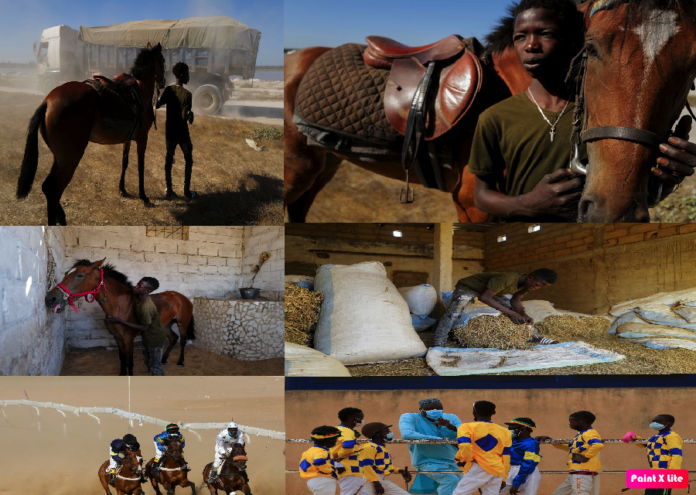 Having won Senegal’s top prize two years ago, jockey Fallou Diop, still only 19, hopes to realise his dream of racing in France next year.

“I want to be the best jockey in a country other than mine,” he says.

“In Morocco or France, anywhere there is horse racing.”

Often used for agriculture and transport, horses, donkeys and mules are an integral part of daily life in Senegal.

And racing has rapidly grown into a national pastime.

“The elders taught us everything since we were young,” Diop says.

“And that’s how I became passionate about horses.

“Since my grandfather, we’ve supported horses, then my father after him.”

Having already dropped out of school, Diop was 12 when he decided to leave a tailoring apprenticeship and pursue horse racing.

According to his father, he walked 10 miles to enrol in the nearest training programme.

Diop lives in a house with 12 other family members, in Niaga.

Diop and other jockeys in Niaga are taught by Adama Bao, whose family has maintained a stud farm for three generations.

“He could compete up to 50 years, with his weight and size.”

Dressed in vibrant yellow and blue, Diop recently put his skills to the test at the racetrack in Thiès, Senegal’s third largest city.

“When I start riding, I get a bit stressed,” he says.

“But after a moment, it’s over.

“At the time of the race, I’m only thinking of victory.