After two weeks of search, investigators from the TRRC fished out skeletal remains of 7 people believed to be among the soldiers summarily executed by the notorious AFPRC junta in November 1994. 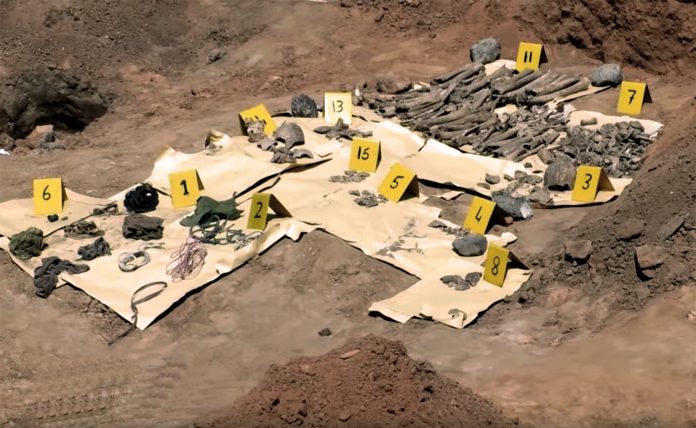 After two weeks of search, investigators from the TRRC fished out skeletal remains of 7 people believed to be among the soldiers summarily executed by the notorious AFPRC junta in November 1994.

According to sources inside the commission, another supposed grave will be dug slater where at least four people are believed to have been hurriedly buried on that fateful day.

Eye-witnesses who spoke to The Standard said the discovery of the remains has attracted a sizable crowd at the Yundum Barracks with some senior serving soldiers who knew the dead men visibly moved by the sight of the bones, skulls and other limbs of their former colleagues.

“We also found rings and what looked like plastic under-wears of the dead soldiers. We counted and collected 7 skulls and some sets of teeth which are almost still intact,” an anonymous TRRC source told The Standard.

Sources said families of the affected soldiers were informed about the exhumation process, adding that the next course of action is for forensic experts to identify the dead men.

“When all that is done the authorities will hand over the bodies to their families and may be the military authorities for a decent burial,” our source added.

The scene of the exhumation, the Cook House area in the barracks yesterday looked like a massive construction site with heavy plants and piles of earthwork.

Meanwhile after the spectacle at the barracks, the TRRC moved back to base to continue hearing into the case of the murder of former Finance minister Koro Ceesay in June 1995 with a testimony from his sister, Ya Bajen Ceesay- Jaiteh based in the USA.

She told the commission how former junta leader Yahya Jammeh pretended to care about the incident when they went there to get update on the investigations.

She said Jammeh ridiculously claimed that it was Jawara’s government, which was overthrown almost a year earlier, that killed Koro.

Ya Bajen also spoke of a visit to the family by the chief suspect in the murder Edward Singhatey whom she said came shedding crocodile tears to express his condolences.

She further revealed a visit to State House for updates on the investigation where they met Jammeh who offered them money but they turned it down explaining that their mission was to have updates.