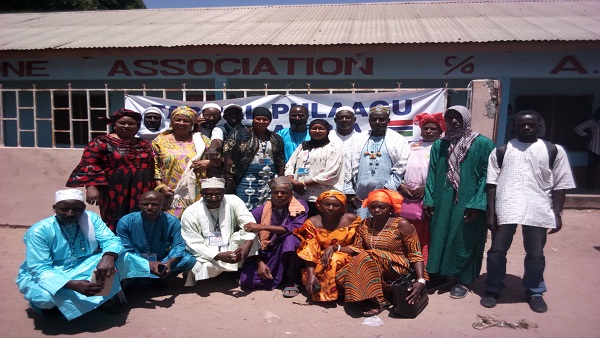 This talking calendar was published by the Trust Bank Ltd. The bank is among a host of others that annually produce calendars. This is a way of attracting more customers. At the end of each year and at the beginning of the following year, calendars are freely distributed not only to customers but also to the public at large. And the public keeps these calendars using them for different purposes.
Trust Bank has distinguished itself as a major calendar producer. The calendars produced in previous years were devoted meanly to the geographical, historical, social and cultural features of The Gambia.

These calendars are always good and resourceful. The 2019 calendar is called the talking calendar because of events and incidents it talks about. This calendar excels in value, historically, and in the educational sector. And the calendar should be registered in the Guinness book of world history. It is indeed a masterpiece.
The calendar tells us in words and pictures some incidents and events already known to some members of the Gambian public. The details however had not been made public. As a result, information about these events were invariably obtained from textbooks authored by Europeans who never gave all the flesh but only the bones. Another source of knowledge are the musings of the local griots. But both sources are always frugal and hazy.

This talking calendar is so good that no one should at the end of the year, throw it in dustbins, rather, it should be kept in safe places as a source of information for posterity.
One of the incidents highlighted in this calendar is about the Sankandi episode about which the people of The Gambia are familiar with and had thought it was only a minor incident. We now know from this talking calendar that we had the wrong view of what happened.
The calendar gives us an insight into the mayhem that unfortunately happened in 1900 to 1901. The details in the calendar will be dealt with later.

The calendar also deals with some bright events in the history of The Gambia. These include pictures of past public personalities who dominated the political and social life of this country for about three decades. The calendar also spotlights the individual who for about two decades was responsible for the interpretation and documentation and the legislation of the laws of this country.

The front page of the calendar captures in style 11 pictures all important and significant, each telling us a story that happened in the past. These pictures are splashed all over the page, and the detail of each picture is provided in the inside page.
The first picture on the the calendar is that of Sir Dawda Jawara in three places. First, unveiling the memorable inscription on bust, renaming Clifton Road to Independence Drive as part of the festivities in celebration of the independence of The Gambia in 1965.
The second picture shows Sir Dawda Jawara hugging President Abdou Diouf of Senegal who was in The Gambia on a working visit for the final discussions about setting up the Senegambia Confederation.

The third picture shows President Abdou Diouf and Sir Dawda sitting side by side in the state owned flagship Lady Wright, while Sir Dawda puts pen on the document setting up the Senegambia Confederation. Looking on is Foreign Minister Lamin Kiti Jabang, Vice President Assan Musa Camara, Sir Dawda’s first protocol officer Sheikh Jeng and Attorney General and Minister of Justice Alhaji Momodou Lamin Saho. The last three are no longer with us. They have answered to the call of the Almighty.

This meeting was the happiest day in the confederation. That day the Senegalese had thought The Gambia had become indefinitely an integral part of the Republic of Senegal. This euphoria did not last long. Soon the relationship turned sour and confederation floundered and at the time no attempt was made to rescue it.
The calendar spotlights in four places the visit of Her Majesty Queen Elizabeth II of Great Britain and Northern Ireland. This was in 1961. The first picture shows her being received by Sir Edward Henry Windley, the Governor of The Gambia at the time. At the background, looking on, is Prince Philip, the queen’s husband. The second picture shows the queen meeting a Gambian chief, believed to be Saikouba Jarjusey. The third scene shows schoolchildren in attendance.

We have now finished listening to some of stories told on the front page of the talking calendar. We are coming to listen to the story being told on Page 2. That page has the two months January and February. This page tells us that small and law-abiding Gambia had had its own fair share of brutalities that made the British colonial and imperial system to survive so long. According to the story, in 1900 a dispute over land between Sankandi and Jattaba, two Mandinka villages in Kiang went out of hand and erupted into violence, causing the death of then travelling commissioner Cecil Sitwell and Mansa Mamakoto Darbo in what became known as the Battle of Sankandi.

The West Indian Regiment stationed in Sierra Leone and the Central African Regiment both descended on Sankandi village on the orders of the British colonial government as a revenge for the death of Commissioner Sitwell. The measures included lynching, killing, burning and hanging of people. As if that was not enough, the village was then burnt down and erased from the map of The Gambia.

Those who escaped, and they did that with the skin of their teeth, sought sanctuary in friendly neighbours and eventually returned to the site to rebuild their ancestral home where their grandfathers, fathers and they themselves were born and brought up.
Today Sankandi stands with great pride at a central point on the Brikama-Soma highway.
What happened after Sankandi was equally distressing, if not more.
The information given below is obtained from a different source. It reveals that after the Sankandi mayhem, the troops invaded Kwinella and crossed the river to north bank and attacked the village of Salikenni. The troops then came back to the south bank, and headed to Jimara in the Upper River Region attacking and burning all Mandinka villages on the way.

The lesson learnt from this Sankandi incident is that the British stopped fighting their own battle in colonial territories. They mobilised people of other territories to fight their wars.
This is what happened in 1914. The people of the colonial territories were sent to fight the Germans and the same act was repeated in 1939. In both wars people from overseas territories, including The Gambia were taking to go and defend the United Kingdom.
No doubt the country calls itself great because our grandfathers and fathers had to time and time again go and die for England. That is what made Britain great and survive for centuries.
Alhaji Bamusa Trawally is a veteran Gambian journalist and researcher.