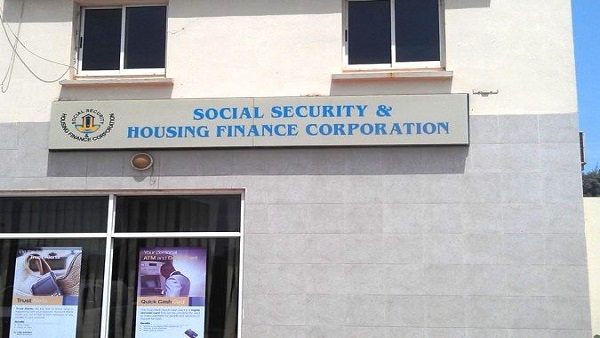 To say the least, the seemingly attractive pension increment and 13 months drawback pronounced by the Social Security and Housing Finance Corporation, which just last month was hurriedly decided upon to coincide with government’s salary and pension increment, is in fact a mockery for the Corporation’s pensioners. The fact that the increment was back-dated to January 2018 is proof that the increment was long overdue and timely decision could not be taken to implement payment. Considering the heightened levels of inflation and the rising cost of living over almost 10 years when the last pension increment was provided, you cannot imagine that only a pittance is added to the corporation’s monthly pension to coincide with government’s 100% pension increment. According to explanations from insiders of the Corporation which were corroborated by bank statements issued us, pensioners receiving monthly allowances of D: 910.00 over the years have a pay rise by D: 300.00 to D: 1,210.00, which reflects a 33% pension increment. Further, reading from the bank statements we have noticed that higher pension earners in fact enjoyed lower percentage increments. For example those receiving D: 2,362.00 have a pay rise of D: 378.00 to D: 2,740.00, reflecting a 16% increment.

The Minister of Finance had good reasons – in the main the rising levels of inflation resulting in rising living costs which affected static pension earners – that convinced the National Assembly Members to accent to his motion to increase salaries and pensions. But we are all Gambians and the high cost of living does not discriminate between sectors of the Gambian society. Hence, if inflation affects all sectors of the economy, it would be proper that the 100% pension increment runs across the board. On the other hand where this is seen to be too demanding on the Corporation’s resources, low pension earners could be considered for the increment.

We cannot now be convinced that the Corporation would have no funds to emulate government’s positive move, when it used to comfortably lend the former President and his close associates, billions of dalasi that were not paid for but did not shake the Corporation. Evidently, besides its sole ownership of financial institutions and large hotels such as the Home Finance Company, the Ocean Bay Hotel, etc, with dominant shares in Trust Bank (Gambia Ltd) and other companies, SSHFC has large idle deposits in the various banks. Were these not the reasons that attracted the former president and his associates to paddle through the Corporation’s finances at the expense of its pensioners? Taking cognizance of such tangible assets, the bulk of its ever increasing yearly earnings in Pension and Injury Compensation contributions, and receivables from all large and small registered business ventures and quasi-government institutions, SSHFC should do much more in securing livelihoods for which it had been established.

Hence, by informing the media of a 13-month drawback when just 16% pension increment is provided to the Corporation’s majority pensioners, at a time when a bombshell 100% increment was released for government pensioners, the Corporation’s pensioners would only regard the announcement a mockery and a farce. In the name of societal security therefore, pensioners implore that SSHFC do much more in fulfilling its mandate to the common Gambian.

Government should establish two corporations to divorce the distinct functions of ‘Social Security’ and that of ‘Housing Finance’.
If you critically consider the name ‘Social Security and Housing Finance Corporation’, you would understand that the SSHFC is wearing two caps each responsible for fulfilling major corporate and societal obligations. Considering the ‘Social Security’ aspect, the Corporation should undertake all steps to assure societal security in terms of easing living costs especially for the weak and the poor. The functions of Social Security of course include periodic pension increments relative to the upward swing of prices of goods and services, the provision of medical facilities for the sick and low income earners, offering scholarships both within and without the country for children of the needy and the have-not parents, etcetera and etcetera, all geared toward alleviating hardships in life and ensuring socio-political and economic stability and security.

‘Housing Finance’ is the second major responsibility of SSHFC and as the name implies, the Corporation should search out ways and means to meet urgent housing and accommodation needs of the common Gambian. The function of ‘Housing Finance’ does not only refer to providing land for housing and accommodation. It also demands the provision and maintenance of lighting, plumbing and road infrastructure facilities in the Estates established by the Corporation. Relevant amenities and infrastructural maintenance in the Estates should be emphasised upon as these are the areas in which the Corporation is conspicuously weak. Whilst the local authorities should partly take charge of infrastructural maintenance, the Corporation should be aware of its responsibilities in its establishment of the Estates. Hence, in cognizance of the above two major responsibilities, one would accept that ‘Social Security’ and ‘Housing Finance’ could exist and operate as two different corporations. Needless to say, housing finance organisations have long existed and operated successfully in many countries both in Europe and Africa.

In the Gambia here we now witness some 20 or more estate and housing agencies compete with SSHFC in providing land and accommodation facilities for the common Gambian. Therefore, just as it embarked on the civil service reforms, the legal and security service reforms, the Gamtel/Gamcel structural and operational reforms to name a few, it is worth the common Gambian while that government urgently considers relevant reforms in the structure and operations of the SSHFC. I wonder if the relevant authorities are aware of this complex labyrinth in which you always lose your way as you seek urgent documents critical to your dining table. The Corporation has earned both fame and notoriety in the clandestine manner it calculates pension benefits and the unnecessary lengthy span it takes to disburse such benefits.