Too many chiefs and very few Gambians: Why I am against creating CRR North as a new region 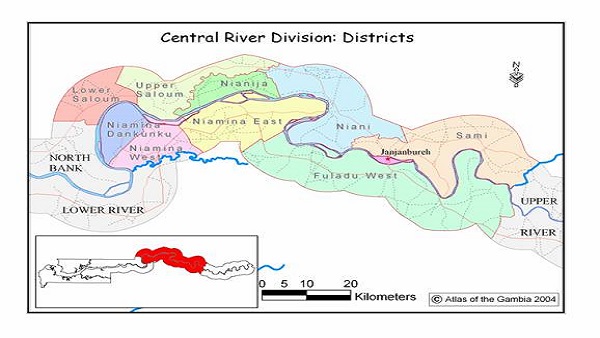 I can understand
I was born at Karantaba Tabokoto, on the northern part of CRR and have lived on the northern part until age 16 when I first visited Kombo so I am in good standing to understand the frustrations of those who argue that CRR North should become a region.
In fact, some years ago, I read in the papers that a World Bank or IMF official had wanted to live in a village that was hardly touched by any serious development and sadly but truly, he chose my second village of Demfaye. Demfaye, in her colonial past had a courthouse where the commissioner heard cases and also a chief prior to the creation of Sami District. The Kebbeh family were the traditional rulers by then. With the advent of independence, Demfaye had long since lost her glory. I happen to live in that village where the central government appears to have forgotten about us. We had no pharmacy, a school, or even a decent source of water supply. This was a village where horses were the main means of drawing water as the wells were so deep, that only around 1pm can you see water inside the wells as the sunrays reflect. The struggle for drinking water is an everyday challenge where water is rationed but interestingly, we lived just less than a 30 minute’s drive from Georgetown, the governor’s residence.

So the idea of further splitting the country into more regions as a reason for development does not seem to apply in our case even when my village is in the backyard of the governor. Anyone in my village who had Western education had to leave to be educated until very recently when we had a primary school.

Last year, I wrote about how policy failure led to the death of two young boys in the nearby village of Sare Karim. These boys were bitten by a snake while sleeping on their bed and because there was no ambulance service, they were put on donkey cart to Karantaba. One died in my village and the other just outside of my village. Sare Karim was just a kilometre from Demfaye. Just around this time, in the name of appropriate technology, the Ministry of Health tabled a proposal in parliament to withdraw ambulances and replace them with horse carts because it was more cost effective and easy to maintain. I was sitting in the public gallery when this issue was being discussed as if we do not deserve any better. Sadly, the said minister had four vehicles allocated to him for his commute and yet a district cannot deserve an ambulance?
And yes, the proponents of CRR North have argued that Kaur should be the regional capital of the ninth province for the reason that it will revive the olden days when Kaur used to be a centre of business activity. Granted, Kaur or in her glory days known simply as Daandeh Maayo, a Fulani phrase meaning “by the riverside” lost her status simply because of policy failure of the central government. River transport and the virtual non-investment in agriculture are the chief culprits. The sinking of Lady Chilel reduced the commercial importance of these many trading centres along the river.

The rhun palm wharfs had all collapsed and if not for a firebrand politician in the person of Suntu Darboe of Kuntaur the construction of the current concrete wharfs would not have seen the light of day. But it was too late for a recovery as no replacement was found for Lady Chilel and agricultural output and investment seriously declined and is still declining. A governor at Kaur will make no dent in halting the decline of Kaur. That decline is directly proportional to the change in policy of the central government for being accountable to the needs of her citizens and in ensuring that investments in the regions are kept in the priority pouch of government.

I lived in Upper Saloum for six years and Kaur was by neighborhood capital where we had interschool competitions and also a port of call for some grocery. In those days, there was one commercial vehicle driven by the great son of the region called Bai Gorreh who had the only means of communication serving Kuntaur and Kaur.

My school at Panchang was a lonely two-room mud block building and the rest of the classrooms were made of rhun palm leaves built by ourselves the students that get blown away after a storm. The next day, we rebuilt. That’s how we maintained our school and I salute the many teachers that accompanied us to the bushes to cut down palm leaves in giving us a chance and access to education. Some of these teachers were not paid for months because the paymaster in Banjul would not travel to pay them. Yet they stayed.
CRR North I agree is one the most forgotten regions of the country. From Kaur to Sami Pachonki, not a single electric bulb was lit anywhere except Kaur and Kuntaur by 1994 and in these two places, it was either the health centres or the area councils.

Telephone communication was virtually non-existent and in Kuntaur, the few telecoms staff I came to know where one Mr Goddard, a short light skinned Aku, who I still have vivid memory of him carrying his signature basket doing grocery at the Kuntaur Market. The other was one Mr Nying, a tall, slim fellow who later replaced Mr Goddard. Myself and a close friend called Bakary Conteh used to brew ataaya for him. But at most times, the telephone lines were not working and trying to access family in the area was almost impossible. I pitied these officers as they must be very frustrated and helpless in changing the lives of the people they were tasked to serve.

You don’t want to know what was going on in CRR North from Lamin Koto to Sami Pachonki. Until last year, that region never saw a bituminous road even though, the Lamin Koto Passamas Road I am told was the first major road construction project mentioned in parliament after independence and it would take 29 years before they could even see a gravel road.

Yet they continued to pay their taxes and adhered to their part of the social contract but have for the most part been treated as a sort of gymnasium where politicians would, once in a while practice virtue as they wished and the people, despite their conditions, continue to carry the difficult burden of keeping their side of the bargain even at the point of suffocation or near death.

We moved from two governors to five; increased from 13 pre-colonial kingdoms to over 35 districts; from eight cabinet portfolios by 1963 to about 13 with creation of the new Ministry for Women and Children’s Affairs (50% increase); from a handful of legislators in Council in 1963 to 53 National Assembly members today making The Gambia, one of the over-represented countries in our region if not the world. With a population of under two million people, further dividing the country into more regions will only bloat the public expenditure budget and will yield no change in the lives of the people. What will improve our lives is making elected officials and public servants accountable and responsive to the needs of citizens. I am a citizen of CRR North but from a policy perspective, a new region is unattainable. If I had my way, The Gambia will have only two regions.

Africa’s response to any problem is to create another layer of bureaucracy to solve the problem. Ask them to fight corruption, they ask for a Ministry Against Corruption. Ask them to improve health care, they ask for a Department for Monitoring Drug Supply. We have to start implementing a zero-growth based budget by delivering better services with a previous year’s budget. It can be done if we can reduce waste.

In 1895, the colonial government enacted “an ordinance to provide for the raising and collection of revenue in the Gambia Protectorate”. It was known as the “Yard Tax” ordinance and its purpose was to set up a yard tax for the protectorate. Although the total expenditure for protectorate services in 1895 was estimated to be £1,455 out of a total expenditure of £29,875, it was the colonial government’s view that the people of The Gambia were to be made to share in the cost of the administration. As a result, every owner or occupier of any yard that contained more than four huts would pay four shillings per annum, and for each additional hut occupied by members of the family one extra shilling per year and “strange farmers” were to pay two shillings. In 1904, a total of £3,168 was collected from the yard tax.

The collection of these types of taxes later transferred to the current area councils. What we have not been able to exert for a long time, is hold these area councils to task with regard to how they spend our monies. Devolution comes with accountability.
If CRR North were to ever become a new region, my suggestion is that Georgetown must remain part of CRR North because the island has always been an integral part of Niani, where many of my people shed their blood to keep it part of Niani. Georgetown has no historical ties to CRR South. Georgetown belonged to Kataba and in keeping our history in context, that should be recognised. Even with the creation of Fulladu, Georgetown remained part of Niani until 1823 but even after that, the king at Kataba maintained a residence for some time and the alkalo of the original settlement called Morro Kunda was paid an annual subvention.