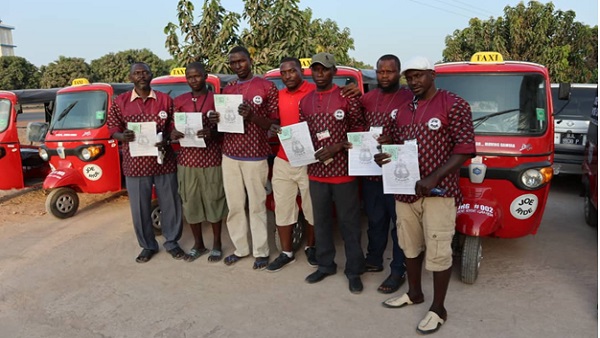 Tooting entrepreneur and co-founder of the Jimmy Asher Foundation, Joseph Maye has launched a new employment initiative in The Gambia through Joe Ride, a new auto-rickshaw taxi service.

On a visit to Sierra Leone in 2018, Joseph became fascinated by the abundance of the three-wheeler vehicles weaving their way through the heavy city traffic and got the idea to introduce the vehicles to The Gambia where friends of his had complained about transportation issues.

Although there are currently numerous taxis cars, they are often dangerously overloaded and uncomfortable, and at times were unwilling to travel to more remote areas. Joe believed that three-wheeler taxis could provide a solution and partnered up with the iconic automotive company Piaggio who manufacture the vehicles, choosing the Ape City model for Joe Ride’s fleet.

In The Gambia, young adults often struggle to find consistent employment that pays well. UK tabloids have recently reported about the unemployment issues in Gambia and the mutual exploitation of the situation by young Gambian men and older British women visiting the country.

The development of the Joe Ride Empowerment and Employment Generation Scheme (EEGS) aims to transform lives by offering a positive alternative for young Gambians to gain skills and steady employment. Joe Ride is also in discussions with youth organisations in The Gambia such as The Gambia Youth Empowerment Project (Yep) to collaborate and support young adults.

Through the EEGS, Joe Ride creates direct and indirect opportunities for young adults through roles such as drivers, mechanics, spare parts retailers, assemblers and so forth.
“Drivers are also further empowered by the creation of economical freedom, with the opportunity to own their Joe Ride vehicle after 18 months of employment with the company. In addition to the taxi service, Joe Ride also sells the vehicles to businesses for commercial use.”

The first vehicles arrived in The Gambia in early February and Joe Ride held a recruitment drive for local drivers and mechanics to sign up. A Piaggio engineer was then flown in to personally train the new employees in assembling, maintaining and repairing the taxis. In keeping with the ‘Buy Local’ ethos, Traditional African style uniforms were created for Joe Ride staff by local fashion designer Yaws Creations.
A special police-escorted parade was organised in the areas of The Kanifing Municipal Council, Serekunda and the West Coast Region to introduce Joe Ride to the local community.

“The reaction was overwhelming, with much interest in joining the Joe Ride team and eagerness to hire for journeys,” one official said.
The first six Joe Ride taxis were released onto the roads on the 18th February, which is also Gambia’s Independence Day. Since then, four more Joe ride taxis have joined the fleet, carrying many passengers to their destinations.