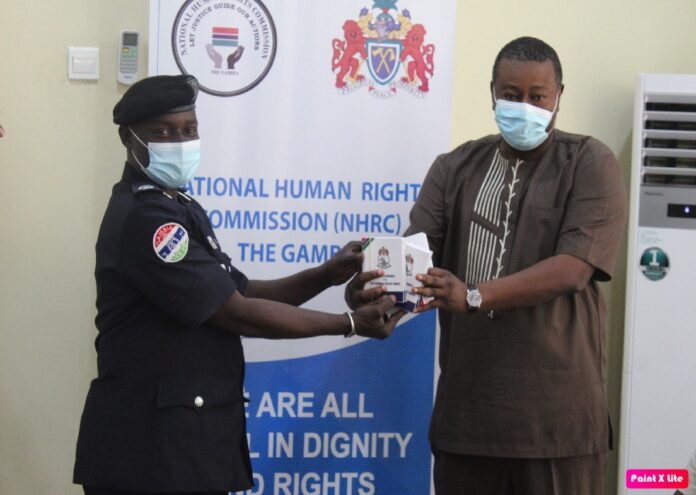 A five-day high-profile training of trainers on the historic code of conduct for the police officers of the Police Training School and other law enforcement institutions such Gambia Immigration Department, Gambia Prison Services, Gambia Fire and Rescue Services, Gambia Armed Forces and The Drug Law Enforcement Agency the Gambia (DLEAG) came to a close on Friday at the NHRC secretariat in Kotu.

It could be recalled that the NHRC in collaboration with the Gambia Police Force prepared a Code of Conduct for Police Officers and adopted the African Commission Guidelines for the Policing of Public Assemblies by Law Enforcement Officials with necessary modification to suit the Gambian context.

The two historic documents were validated in 2020 and this training is one in a series of ways to build the capacity of Law Enforcement Officers in crowd control and the treatment of suspects under their custody.

The overall objective of this ToT are: Enhanced the knowledge and skills of Law Enforcement Officers, particularly the police on the Code of Conduct for Police Officers and the Guidelines on Policing Public Assemblies in The Gambia; Enabled Law Enforcement Officers plan and deliver trainings on the Code of Conduct and Guidelines for Policing Public Assemblies; Deepen a practice of human rights-based approach in crowd control and the treatment of suspects.

By virtue of Section 178 (1) of the 1997 Constitution of the Republic of The Gambia establishes the Gambia Police Force and mandated among other things to: perform its traditional role of maintaining law and order and similarly, Section 4 of the Police Act specifically mandates the police to protect life and property, detect and prevent crime as well as apprehend and prosecute offenders, but this sacrosanct duty of the police was seriously challenged under the regime of Yaya Jammeh.

However, with the coming up of a new administration in 2017, the demand of respect for fundamental rights and freedom and rights to freedom of association and assembly in particular has been severely tested in The Gambia thus the need to prepare the police to respond in line with international minimum standards.

In a speech delivered during the closing ceremony, the Chairman of the National Human Rights Commission, Emmanuel Joof thanked the Police leadership for their commitment to reform the force and he assured the Commission’s readiness to support this endeavour.

Assistant Commissioner of Police Mustapha Ndong deputising for the Inspector General of Police said “Gambia Police Force is undergoing serious reforms in line with security sector reforms (SSR) initiated by the Government of the Gambia.

The top police officer declared “amongst others, the reforms require review and where necessary total reengineering of our core business processes to enable us operate in tandem with democratic policing norms and principles”,

Hundred copies of the Code of Conduct were presented to the Police by Chairman Emmanuel Joof and more copies will be distributed shortly.