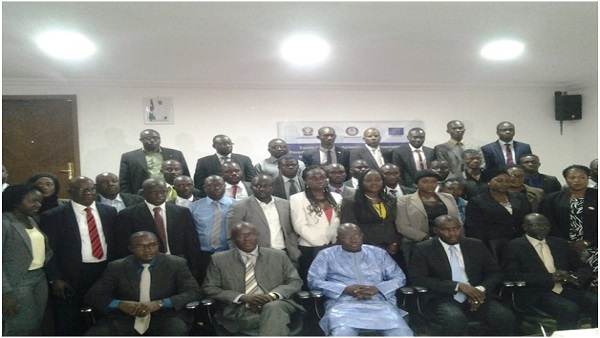 A training is currently underway to help in the crusade to combatting money laundering and terrorism financing.
It is being organised for financial institutions in the country. The four-day training kicked-off last Monday at a local hotel in Kotu.

The training is initiated by the Financial Intelligence Unit (FIU) of The Gambia under the support of Strengthening Anti-money Laundering Capacities in West Africa (Samwa) project, which is being funded by the EU in collaboration with Inter-Governmental Action Group Against Money Laundering in West Africa (Giaba).
The meeting will work to harmonise the implementation of preventive measures on money laundering both in The Gambia and within the West African Sub-Region.
The permanent secretary of the Ministry of Finance and Economic Affairs, Mode Socka, said money laundering and the financing of terrorism activities are crimes that have significant negative economic impact.

“They pose a threat to the stability and soundness of the country’s financial system and can undermine its political stability and development,” he said.
“Effective anti-money laundering and counter financing of terrorism regimes are therefore essential in preserving the integrity of national economies and the global financial system,” the PS added.

“However,” he said, “in order to achieve this objective, it is crucial for all the stakeholders to contribute their quota by ensuring that they have appropriate policies and procedures in place, and by adopting best practices.”
He said the financial sector is a key component of that stakeholder composition.

“It is important that the sector remains prepared to tackle the ever-increasing threats it faces and one vital way of doing this is through capacity building.”
The first deputy governor of Central Bank of the Gambia, Dr Seeku A K Jaabi, said many institutions- public and private are inadvertently expose to the risk posed by money laundering and terrorism financing with financial institutions most prominent.
“You are the gateway to significant proportion of money laundering and terrorism financial activities, and as such, you have the crucial role to play in ensuring that adequate safeguards are in place to protect your institutions and the financial sector in general,” he told the gathering.