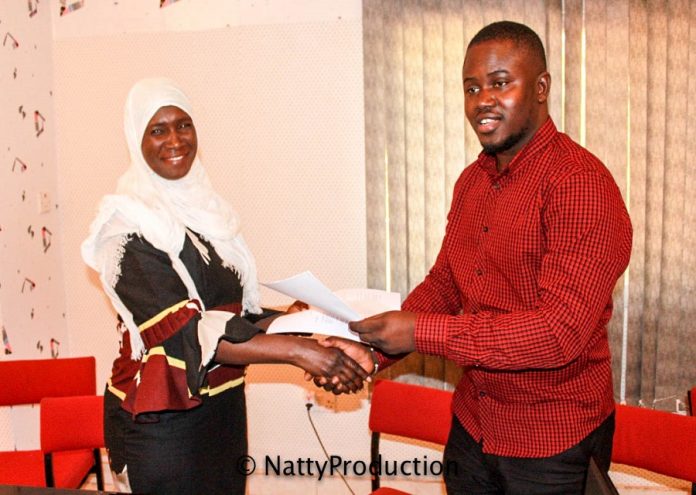 A new project has been signed to help ‘bridge gender gaps’ in the Gambian media industry.
The Women Journalists Association of The Gambia in collaboration with the Gambia Press Union,GPU signed the million dalasi one-year project dubbed ‘Breaking the Barriers’.
The project seeks to empower women journalists in the eliminating of barriers underpinning their development by using a two-pronged approach.
The initiative was funded by Unesco at a tune of about D1,089,330.00.
Haddijah Jawara, GPU program officer, said the union realised there exists “a huge gender inequality gap” in the media which seem to give men an edge over their women counterparts. She said this trend means that men continue to dominate in key positions in newsrooms across the country.

According to her, it was against that backdrop that the union and Unesco realized the need to “break the gender barriers” in newsrooms through capacity building.
“The project will focus on several areas like politics, business, sports and other core areas,” Ms Jawara explained. “It also seeks to address sexual harassment in our newsrooms,” she added.
She said the union’s affiliates must be supported “so that they [WoJAG] can grow and support its members.”

Sarjo Camara, WOJAG President, said it is an established fact that there exists “huge” challenges to gender equality in every strata of life in The Gambia and the media is not an exception.
“In the media,” Sarjo began, “men continue to dominate in key positions in newsrooms across the country whiles women are left to junior positions or forced to change career due to deep-rooted traction of abuse and exploitation and systematic discrimination of women in the media.”

She said she is of the belief that the project will empower women journalists and eliminate the barriers to their development thereby changing the status quo in the industry.
WoJAG, she said, aims to improve the working conditions of female journalists whiles promoting standards through capacity development.
She said: “The under-representation of women journalists in key decision-making positions in The Gambian media institutions, contributions to the under-reporting of women’s issues.”

Sarjo said providing adequate capacity building initiatives to women to become gatekeepers is “indispensable for equality and equity in the newsrooms for sustainable national development.”
Saikou Jammeh, GPU secretary general, said 20 female journalists will undergo the intensive four months training if selected.
He said the curriculum and the trainings will be done by the Media Academy for Journalism and Communication (MAJaC).

He said unlike the trainings conducted by GPU, the approach that will be taken for the up-coming training will be ‘unique and innovative’.
“It is unique because it combines capacity building and advocacy,” Jammeh said.
“Before there has not been any kind of sexual harassment policy. We were all talking blah blah but no policy. The women journalists will develop a policy and we hope that it is going to guide the movers and shakers in the media,” he concludes.