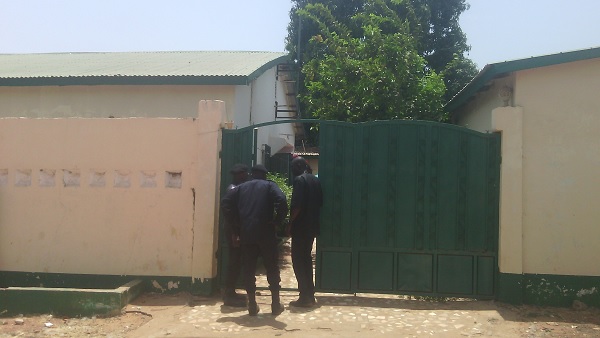 A private residence used as a secret detention center by the National Intelligence Agency was the first port of call by the TRRC which began tour of such facilities.
The residence, located near the Jeshwang Prisons was the place where senior military officers including one captain Baboucarr Bah as well as other civilian detainees, were subjected to secret confinements under inhumane conditions.
Captain Bah referred to this secret detention center in his testimony at the TRRC, saying he was handcuffed to the wall.

The commission discovered that there was a residential area with air-conditioning adjacent to a detention room consisting of two rooms and a parlour with four cells.
The cells, measuring 3X4 meters are stalled with iron hooks on its walls just above the ground floor, used for handcuffing detainees who are never allowed to see the sun.
The self-contained luxurious apartment, still occupied by the personnel of the NIA (now SIS), is well equipped with air conditioning, TVs and other housing utensils.
It is alleged that the NIA would relax in this apartment after they locked up detainees into the cells to enjoy the luxury.

The house is the first out of three secret detention centres to be visited and they include one in Bundung and Brusubi used to secretly confine political, security and other detainees across the country.
Also as part of its mandate to recommend institutional reforms, the commission visited the Fajara Barracks and Old Jeshwang prisons.
According to the commission the visit is necessitated by the adverse mentions of these places by some victims of torture and unlawful detentions who testified before the commission.

During the course of the visit, Commissioners and members from the legal team inspected the condition of the Barracks and prisons and heard the sides of the authorities in charge.
WO1 Lamin Fatty, the camp RSM who was a witness to the Nov 11 shootings in the camp and Major Yahya Darboe the commanding officer of the Barracks, took the commission on a conducted tour of the barracks.

RSM Fatty, who denied that he himself was ever involved in torturing detainees, told the commissioners that he was in the Barracks when Council members stormed the camp with their truck and descended on soldiers alleged to be planning a coup and randomly fired resulting in the death of some officers and soldiers.

At Jeshwang Prisons, Deputy Commissioner of Prisons, Alagie Jobe led the inspection of various wings including convicts in remand and the juvenile wing where more than 11 teenagers aged 12 and above are locked.
The Juvenile wing has three teachers for tutoring prisoners.
The Commission will also visit Janjangbureh.