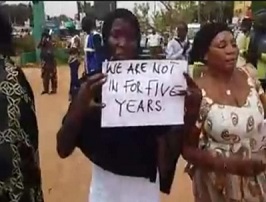 The Vice President of The Gambia has said the objective of the Operation 3 Years Jotna “is unconstitutional.”

Speaking during the National Assembly adjournment debate last week, Dr Isatou Touray said: “Five years is the constitutional term of the president. Let us forget about the 3 years for the sake of peace. I know people are very proud of what happened during the group’s protest. Yes, it is a democracy and people have right to association and assembly but three years is a fundamental flouting of the constitution. It was a tactical strategy and I am proud to hear that being echoed in the National Assembly.”

She continued: “The 3 years was a tactical strategy and we should not fan the embers on a matter that is unconstitutional. Let the public understand that 3 Years Jotna is unconstitutional. It was just a strategy to bring about the change. We must avoid creating pandemonium in this country but we must discuss on the way forward and not things that will create uncertainty. Let us see The Gambia. People are tired and the agenda was to transit from dictatorship to democracy and so we cannot undermine the change, because if we do, we will be undermining the future of this country.”

Turning on to the country’s young people and the recent boat accident, VP Touray said youths must not allow people to use them as gateways.

“Leadership is about making decisions and sacrifices in the best interest of the people and not about individual interest. The boat accident should be seen as a collective responsibility as there were people who could have stopped it, but because there is still resistance to the change in some corners, things like these are happening,” she added.

The controversial 3 Years Jotna group was among the topics hotly debated during the adjournment debate.
The National Assembly Member for Serekunda West, Madi Ceesay called on the President to immediately act on the group’s petition.
“The president is warned to act on the petition without sentiments,” Ceesay said.
He said no serious government will ignore the number of people that protested on 16 December.

“Coalition members have no moral latitude to question the 3 Years Jotna because it is their creation. It is only GDC and APRC that can question the 3 Years Jotna because they did not take part in its creation and they campaigned for 5 years. Yes it is indisputable that the constitution says 5 years but President Barrow campaigned on 3 years programme and he is breaking the promise. So why does it look criminal to remind him”? Ceesay asked.

However according to Ceesay, it is up to President Barrow to honour the 3 years. “But if he refuses to honour, the electorate will decide at the 2021 election.”

Alhagie S Darboe, NAM for Brikama North said: “It is up to President Barrow to concede to the wishes of the people or act otherwise. The ball is in his court.”

Meanwhile, Alhagie Jawara of Jimara, Minority Leader Samba Jallow, Saikou Marong and Baba Galleh Jallow all simply said the President should serve for five years as mandated by the constitution.