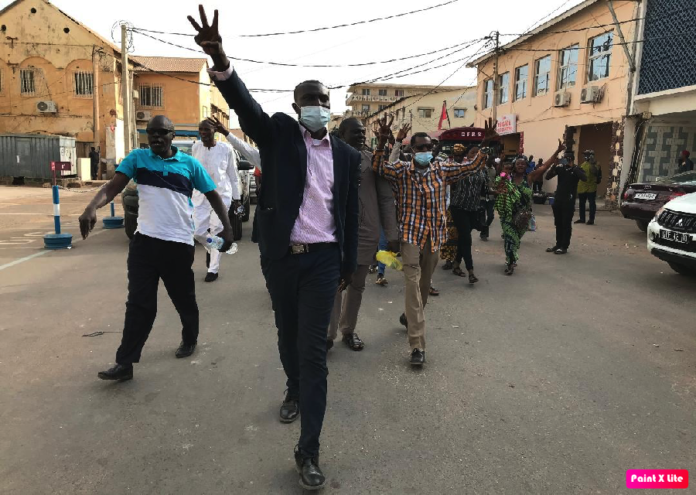 One really need not have a vested interest in the subject matter nor even have a skin in the game one way or another for you to hold the view that Three Years Jotna (TYJ), was from the word go a cause in futility. This was my view back then and it remains my view today. The president has constitutional authority to remain in office for five years; citizens (TYJ in this instance) by the same measure are entitled to exercise their right to freedom of speech and expression including to challenge any president to step down regardless of whether the premise of such a position is valid. My sincere apologies for stating the obvious but it’s crystal clear that the legality of any exercise of such a right is not dependent on the merit or the state’s approval of the object of such advocacy. However, it must be emphatically stated that the latter’s right does not go as far as empowering them to seek active measures in order to effect the removal of a president nor does the former have a legal authority to thwart any citizen’s right to express an opinion to the effect that they should relinquish power. Not that I’m suggesting that either or both the aforementioned are guilty of overstepping their bounds in the afore-stated literal terms — well I’m not saying so just yet but, only affirming that the above-stated is my understanding of the relevant law being section 25(1) of the Constitution.

In the case of TYJ at least, I doubt anyone could land any legitimate punches on them for want of trying. For what it’s worth, it’s fair to say that the cause merits credit for effort. For a cause so diminished and which now only exists in memory and name, serious questions have got to be asked of the wisdom which informs the state’s decision to re-arrest and reinvent the wheel supposedly to ill-advisedly re-initiate a fresh trial having withdrawn their case against those concerned; this overlooks or perhaps ignores all consequential political risks as well as others. To be absolutely clear, I’m by no stretch of any imagination suggesting that such would replicate the political trials of 2016 which arguably primed the atmosphere for the David versus Goliath knockout blow which followed on 2nd December 2016 when voters handed former president Jammeh his head. However, in an election year, such is nevertheless a glaringly obvious unmitigated risk especially given recent precedent. For anyone who is of a risk averse disposition, it’s quite extraordinary as to how one (the government of the day in this instance) places oneself at such jeopardy, not only in willingness but also with anticipation as if they have the exclusive franchise on the potential risks.

All aspects of the lamentable events which necessitate this literature are worrying for sure and, under normal circumstances, the logical genesis of any assessment of this nature would begin with some sort of an analysis of the legality of the events. With this one though, the truth of the matter is, for a supposedly emerging democracy, it’s so abnormal and unprecedented, it dwarfs even the silliest of tricks and contempts against the norms of the established legal order imaginable under both the quasi-dictatorship and the dictatorship jurisdictions of the former regimes. No disrespect to equally concerned and well-meaning commentators who already did so but, just like I’ll be extremely reluctant to engage a tin-foil hat claim that there are 62 instead of 26 letters in the English alphabet, I’m equally firmly minded to steer well clear of any attempt to abseil down the rabbit hole of seeking to analyse the legality of the state’s grossly irresponsible actions on this occasion. I would however add that there’s good reason to believe that what appears to be an emerging rogue state doesn’t seem to have colonised our courts (well not yet) in which case we should be heartened by the high likelihood that the dishonourable ploy will, in the long run eventually crumble under the weight of its internal legal contradictions and rightfully so. Therefore, I guess there’ll be ample opportunity for a posthumous examination at some point in the future. Until then, its legality certainly merits no analysis whatsoever. Contempt does not deserve the deference of dignity and, it mustn’t be accorded it.

The actions lamented herein, when considered in isolation of everything else, it’s perfectly understandable how one would quite easily end up heaping all responsibility and culpability squarely on the government. This won’t be an inaccurate conclusion but, it isn’t complete either and I say so because such a determination rides on an assumption which does not take into account the existence of oversight authorities but for whose malfeasance the enabling environment for such abuse to take place would not even exist. With a national human rights watchdog, the NHRC, which for reasons best known to them actively goes out of its way to launder culprits of human rights violation and undermine complaints against human rights violations, what could possibly go wrong? I’m certainly not attempting to draw a link akin to an unhinged suggestion that the dry season comes before the rainy season so therefore seven months of dry season causes five months of rainfall — of course it’ll be daft to imply a causal link between two inter-related occurrences which precede each other solely on grounds of close proximity and inconsequential relationship. In the case of the subject matter under review however, truth be told, the observable realities are such that there’s a reasonable nexus between the malfeasance of the oversight authority (the NHRC in this instance) and the impunity which drives state actors to engage in noncompliant conduct in the full knowledge that accountability will not follow.

Once one begins to abdicate their responsibility and compromise their underpinning values whether wittingly or otherwise, then not far down the line from such unjustifiable omission comes passive complicity. I feel obliged to point out that I make no accusations of complicity but only stating that if such trend continues, it would be reasonable to construe the NHRC and the state to be part of one noncompliant whole in which case any future accusations of NHRC complicity in future human rights violations on the part of the State would be absolutely valid and impliedly so. I cannot see why not. Could you?

So, I suppose the crux of my argument here is that the issue isn’t a one dimensional one and, more importantly, unlike the days when a national human rights watchdog didn’t exist, human rights violations by state actors in today’s Gambia should be viewed in conjunction with the NHRC’s failure to discharge its statutory core mandate, a failure from which impunity is evidently beginning to take hold and thrive to the detriment of society as we’ve seen play out at the Court premises last week Wednesday. The irony of the NHRC’s decision to lecture on public health (Covid-19) while not saying a single word on such  monstrosity of a violation I’m sure inspires so much confidence.

For someone who belonged to the ‘constituency’ of Gambians whom were branded the pejorative label “DSS” (please don’t ask what that means) by the former highly provocative allies (now bitter adversaries) of President Barrow from whom emerged TYJ, it’s quite tempting to join others in rubbing my hands in glee at their misery. However, that misses the point entirely because the focus should be the noncompliant conduct (or the violation for a more fitting term) which sets a dreadful precedent under whose wrath anyone of us could fall someday rather than the focus being incorrectly fixated on those to whom such violation is subjected today. My views on TYJ and the deception which conceived the cause is public knowledge; I even had to hold back (and in fact still holding back) on throwing their way an accusation of double standards concerned that such may undeservedly imply the existence of standards where none at all exist. This is how much regard I attribute to the cause. But, however objectionable one finds these as some do, such must not prejudice one’s sense of reason to such extent to allow passion to override it. The actions of the state under review set a very concerning precedent and that has to be a worry regardless of one’s subjective view and opinion of TYJ et al.

Once a government starts to act in the sort of unconventional manner with people with whom politically, it diametrically disagrees, then they’re on that long miserable road to totalitarianism. Well, this is the impression such gives, just the wrong sort of seed any incumbent would wish planted in the minds of a post 2016 Gambian electorate especially in an election year. I of course do not speak in astrological terms but, just saying that history does have a way of repeating itself and in light of which fact one would imagine that the State would appropriately reconsider its growing noncompliant conduct and readjust accordingly.

Ageing in The Gambia: a celebration or a challenge?