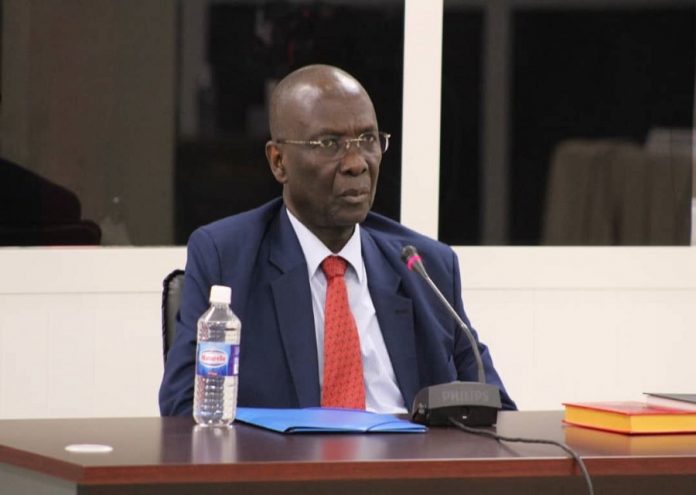 Sulayman Alieu Jack, a former permanent secretary at the office of the Vice President and Ministry of Defense in 1994, has dismissed any suggestion that his former boss Saihou Sabally, who was the most ‘powerful’ civil servant in the Sir Dawda inner circle conspired with the army in overthrowing the PPP government.
Mr Jack, who is the current Gambian Ambassador and permanent representative to the AU, yesterday told the TRRC that aside from theories alleged by many, he has not come across any iota of evidence that suggests Sabally’s possible involvement in ousting the Jawara government.

“I do not think any sensible politician would be stupid enough to conspire with an army in overthrowing a government he himself is serving on the pretext that they would put him to power. That was not accurate and has never happened anywhere in Africa,” Ambassador Jack said.

The witness further claimed that Sir Dawda had a huge confidence in Saihou Sabally, adding that there were even rumours that the president wanted to change the constitution to elevate the VP’s office into a prime minister.
He said the former VP was in fact not a popular figure in the army after rumours of corruption when Sanna Manneh, a journalist won a case against him.
Mr. Jack, who was amongst a group of permanent secretaries forced by the military to conditionally retire few months after they took over, gave a detailed account of factors he thought led to the 1994 coup.

He said the famous PPP congress of 1991 in Mansakonko when Sir Dawda announced his intention to step down from power only to rescind his decision has generated controversies, divisions and mixed opinions within his ruling party.
According to Mr. Jack, these controversies culminated in creation of rival factions such as the BB Dabo and Sabally camps since the former has served under Jawara as VP for 10 years and was widely regarded as a natural successor.
He said this created an uncertain atmosphere, as people remained clueless as to who will succeed Jawara.

Dissatisfaction in the army
The witness further adduced that there were lot of dissatisfactions within the army in terms of accommodations and proper conditions of services for soldiers, making it difficult to manage proper regimentations. The witness also claimed that the presence of the Nigerian army was perceived by soldiers as a way of denying them opportunities to assume command roles, coupled with their flamboyant life styles in terms of accommodation and conditions as compared to their Gambian counterparts.
He said his ministry (MOD) tried to address these issues to no avail because the funds were not available.

He said when the Nigerian Army team NATAAG arrived in the Gambia, their commander General Dada’s first move was to forcibly retire Major Maba Jobe, who was the most senior officer in the Gambian army because General Dada said he could not work with him. He said this did not go down well with the soldiers.

Lack of civilian oversight
He said prior to the military takeover, there was little or no civilian control over the army since his ministry at the time lacked the required capacity and civil expertise of defense to effectively carry out its oversight function. He said this was further complicated with the absence of a coherent defense policy and a parliamentary committee on defense as well.

Intelligence failure
He said the National Security Services, NSS, which was tasked with intelligence collection, and analysis of internal and external security threats in the country had deficiency in administrative capacity to detect security threats in the country.
The late Kebba Ceesay, the NSS former director he alleged was not up to speed in intelligence interpretation as his briefings had only focused on Kukoi Samba Sanyang alleging to be planning an external attack on Gambia and nothing on internal threats.

Mr. Jack, who holds masters of philosophy in politics from Glasgow University, further claimed that the amalgamation of the Gambia National Gendarmerie into the Armed forces was a political decision that could trigger the military to takeover since all the heavy arms previously under the GNG were all