3 years on, ‘no visible reform’ of SSR 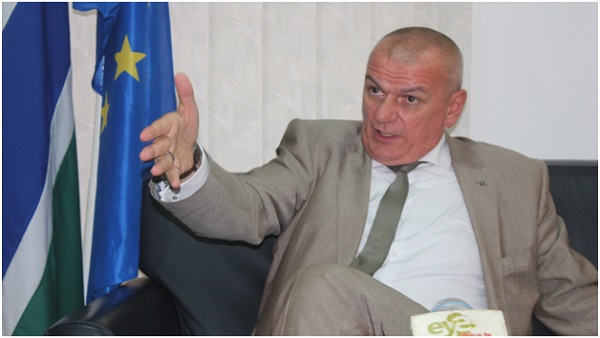 Almost three years have passed since the launch of an ambitious Security Sector Reform, SSR program, but it is hardly felt anywhere in the country, the EU ambassador chastised.

President Barrow’s government launched the program in 2017 to create an efficient and accountable security sector, after its personalisation and polarisation by the Jammeh regime.

But Attila Lajos feels not much has changed since its launching.

“The Gambia is changing, but almost 3 years have passed, yet to date, there has been no visible reform of the security sector. Security sector reform should not be restricted to the leaders of security forces nor to the government, it got to be visibe nationwide”, he said.

He was addressing lawmakers at the NaNA conference hall in Kanifing, where the Geneva Centre for Security Sector Governance (DCAV) completed a 5-day training for National Assembly members on defence and security of the national assembly on legislative analysis and budget scrutiny.

He said lawmakers serve as a focal point for public attention on defence and security issues.

“You [lawmakers] provide critically important means through which awareness, understanding and trust can be enhanced between the electorate, parliamentarians and the executive.

Supporting the [NA] committee on defence and security to assume this role to its full potential is a core objective of EU in The Gambia,” he added.

He criticised further the ongoing drafting of the National Security Strategy and the SSR, saying they lack the required political direction for the process to be effective, accountable and sustainable.

“Working with DCAV, I hope you have identified the Standing Committee’s goals for the coming years,” he stated.

Momodou LK Sanneh, deputy speaker and chairperson of the Standing Committee on Defence and Security, concurred that there was no proper oversight on the security sector during the 22 years of the dictatorial regime of Jammeh.

“This committee was one of the most dormant committees in the National Assembly, even though it had all the power needed to perform oversight as provided for in section 109 of the 1997 constitution,” the lawmaker stressed.

He added: “I believe with this training, we will be able to transform the security sector of this country by making it more accountable and transparent to the citizenry through the National Assembly.

I have no doubt in my team, as they are determined to leave no stone unturned in performing their legislative and budgetary oversight.”

He praised the EU, which funded the training, for equipping members with the requisite skill and knowledge in legislative drafting and budget scrutiny on the security sector.

“This will promote and strengthen the democratic participation and oversight on the security by the Standing Committee on Defence and Security.”