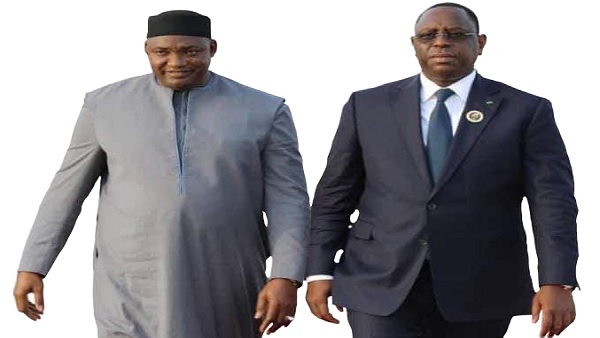 After 40 years of waiting, the vital waterway linking economic and social life of The Gambia and Senegal has been crowned with a 942 metre long bridge and unveiled by Presidents Adama Barrow and Macky Sall at a ceremony attended by thousands at Bamba Tenda yesterday.

The bridge is extended by 360 and 600 metres on the south and north banks of the river to cover the adjoin swamps. It is 12 metres wide of which 7.5 metres is the motorway and 1.5 metres as footpaths. It costs 67,408,547 euros and was financed by the African Development Bank. The bridge has durability tag of a century.

Apart from the bridge, the bank is also building the road network on the corridors to the bridge from northern Senegal to Farafenni via Kerr Ayub and Ziguinchor to Yelli Tenda via Senob. The bridge will be tolled with the revenue earned to be spent on maintenance.
President Barrow who presided over the official opening said the bridge marked the practicalisation of a concept that has long been dreamt of and which stands today as a solid manifestation of the sisterly relations between the countries. The president told his counterpart Macky Sall that the bridge, which he christened Senegambia Bridge, is an icon of African integration started by the people of Senegambia to inspire the whole continent. “If we are preaching integration of Africa, we have to start integration right from our own home and that is what this edifice represents,” he said. Barrow said the crossing has for centuries hampered trade and social interaction between a people who are one and the same.

Senegalese President Sall responded that the bridge is a product of the goodwill, vision and political will of President Barrow and the Gambian people. “I must make it clear that the bridge is a Gambian bridge but it benefits the West African region and beyond,” he said.
Amid celebrations marked by musical performances between breaks by Youssou N’Dour, Jaliba Kuyateh and Touré Kunda, the two presidents proceeded to take first ride over the bridge to greet the governor of the LRR who waited on the south bank to welcome the first traffic on the bridge.

The two presidents and their ministers of works thanked the contractors Arezki. According to officials, the bridge which is opened to passenger vehicles but not lorries, which will have to wait until mid year when engineers will give the all-clear for the transportation of heavy good across it.