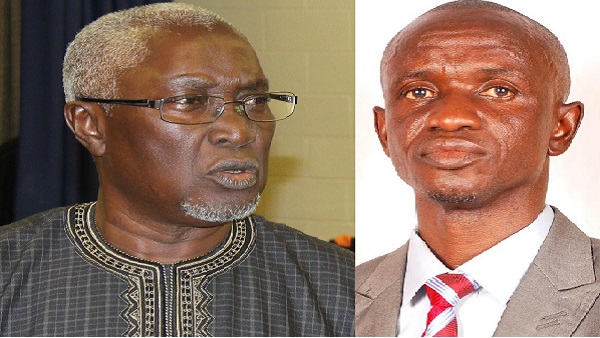 Former PPP leader, Omar Jallow (OJ), has joined the former vice and co-chair of Coalition 2016 Fatoumatta Jallow-Tambajang in asking UDP’s Brikama North parliamentarian Alhagie S Darboe to account for and retire the Coalition funds given to him.
In a wide-ranging interview at his home over the weekend, Mr Jallow told The Standard that “it is important for the sake of transparency and accountability and due respect to the people who contributed, that they are told how the funds they donated were spent.”
In 2016, Gambians in the diaspora made contributions totaling D4.2 million to support the coalition in its campaign activities under the Gambia Democracy Fund. The greatest chunk of the sum was dispatched through Mrs Fatoumatta Jallow-Tambajang, who recently stated she delivered the money to the coalition finance committee chaired by Alhagie Darboe who is also the administrative secretary of the UDP.

“It is important and ethical that those who were handling the funds of the coalition account for them so that those who contributed will know that the funds were used for the purpose for which they contributed. I think that is very important right now,” said OJ.
He said even his party, in the interest of transparency, is preparing a statement of finance so that an account of monies that were contributed for their last congress will be published and sent to all individuals and organisations that donated to them.

Vexed MoU
Commenting on the transition term debate, Jallow said President Barrow should honour the three-year agreement, arguing: “I made it very clear from the onset that I campaigned for three years and even if I was still a minister I would have resigned after the three years. That is the contract I have with the Gambian people.
“This is why my sacking as minister means nothing to me because I was here for 22 years after being minister for 15 years under Jawara. Jammeh promised me millions and ministerial positions but I refused because I was against dictatorship, military rule and violation of human rights. That is me.”

Speaking further OJ said the government should go back to the drawing board and look at areas like the economy and food availability in the country, adding, “There should also be serious reform of the country’s security and creation of job opportunities for young people.”
Asked whether he has spoken to the president since his sacking, OJ replied: “Never. And I am not the least disappointed because my sacrifice was for the Gambian people and not President Adama Barrow. People are different in their thinking and approaches but for me, thank God even during the PPP government, a lot of people got angry with me for saying certain truths to Jawara because I will never ever idolise a leader. We make him what he is and we should not be afraid of telling him the truth.”

Cabinet
He advised the cabinet ministers to avoid repeating the mistakes of yester regimes by glorifying the president to make him feel he is indispensable. “Governments come and go but the state always stays. The people in cabinet have a responsibility to tell the president the truth and give him the correct advice if they feel he is not doing what is right,” he concluded.