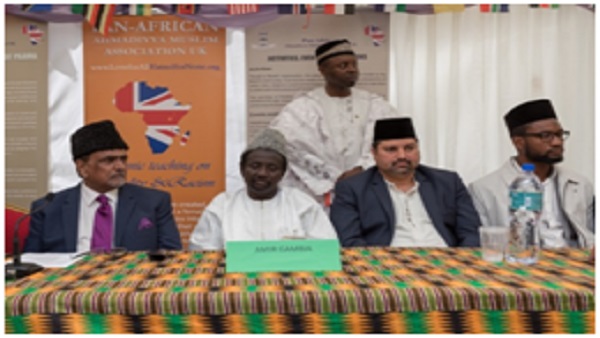 The Ahmadiyya Muslim Jama’t The Gambia, Wednesday donated food items including clothings and cash of over D82, 000.00 to a hundred fire victims in West Coast Region.
The donation was designed to assist these tragedy-hit victims as they seek to rebuild their lives. The ceremony was held at the governor’s office in Brikama.
Thirty bags of rice, 15 bags of onion and cookng oil were donated.
Speaking at the presentation, Baba F Trawally, the Amir of the Jama’at said his religion, Islam, teaches that when a person is in difficulty, others must go to his/her help.
“We all live together in our various communities. This is why we came in the name of Islam to help the poor and the needy,” he said.

The Amir advised victims to be careful in the future with candles and gas bottles, which many said are some of the causes of the recent spate of fire outbreaks in communities.
Lamin Mass, director of Administration at the National Disaster Management Agency, NDMA, said it was no surprise to see the intervention of the Jama’at in the lives of the disaster victims.

“They have been helping in education, health and other sectors,” he added.
He thanked the Jama’at for the gesture.
Musa Suso, the deputy governor of the West Coast Region, who spoke on behalf of the governor, also expressed gratitude to the Jama’at.
He said: “This donation cannot recover the amount of materials perished in the fire, but it will reduce burden on the victims.”
He called on NGOs, philantropists and other organisations to emulate the Jama’at.