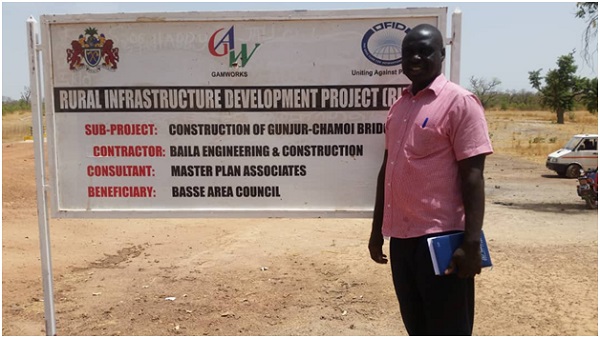 The Chairman of Basse Area Council, BAC, Foday Danjo, has called on Gambians to be law abiding and pay their taxes on time.

He stressed that no meaningful development can take place when citizens fail to pay their taxes on time.

The chairman made the appeal over the weekend as he laid the foundation stone of a 6KM road linking Sare Julay and Dingiri in Tumana District in the Upper River Region, at a cost of D13,736, 890.00.

He said: “We have received report that many a time women in labour do pass through this difficult and challenging road on referral to Basse District Hospital.

When I was on my campaign, I passed through this road and I found out that the road was in a very horrible condition.

“The construction of this road will be of valuable importance, and will improve the lives of the people of the region.

“For 54 years even a wheelbarrow was unable to roll on this road. But thank God the project is implemented today, and it all came through the payment of taxes.

That is why I am calling people to come out to pay their rates, because the rates that they are paying, we plough it back to them through development.

“There are those who are not paying their rates, yet at the end of the day they expect development.

It will be very difficult for the central government and the Area Council to provide development for them.”

Samba Bah, the deputy governor of Upper River Region, urged the Council to monitor the work to the “fullest”.

“Gamworks promised that the work is going to finish within eight months. They need to evaluate and monitor the work in order for them to finish on time.

They have to monitor also, the quality of the road. We don’t expect to construct a road then after two to three years start seeing problems.”

Foday Drammeh, NAM for Tumana, expressed delight over the project, however, he advised: “Don’t allow anyone to come here and fool you. The money that is being used on this road is your money.”

He told the gathering that “what happened here during the 22 years [of Jammeh’s rule] will never be repeated here,” the lawmaker said, without giving any specifics.

He cautioned natives to be mindful when the work commences.

“…Especially your children, should stay away because we have the heavy machines.”

Other speakers included Momodou Lamin Jaiteh, CEO of BAC, and one Papa Touray.