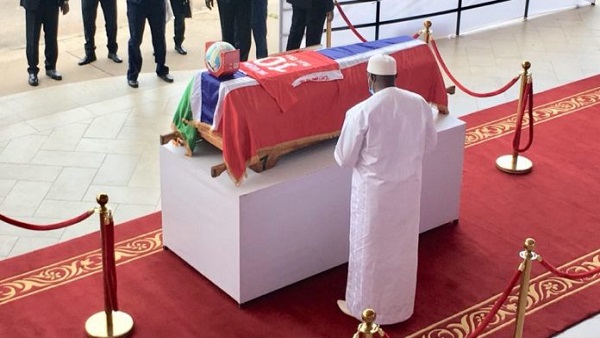 President Adama Barrow has described legendary Gambian footballer Biri as a great son and icon of the land who had left behind a perfect reputation in his beloved country and the world.

Leading the nation in homage to the late Gambian player who died Sunday, Barrow at a packed Arch 22, said as Gambians mourn Biri, they should all be proud of and be inspired by his actions and livelihood for humanity. “His sacrifice for the country and national development is immense, both as a footballer and politician. I remember Biri as a super star and a humble character who had demonstrated remarkable qualities in his family and country and also a patriot who used his own money to attend to national duties,” he said.

The president then proceeded to confer a posthumous award, the Grand Order of the Republic of The Gambia to Biri. “It is unfortunate that Biri did not live long enough to receive our national award. It would have been our wish to do this while he was still with us but no one can change what God destined,” the president said as he declared the award.
Meanwhile, Banjul Mayor Rohey Lowe, Adama Halla Samba and Mass Axi Gai all paid tribute to the late Gambian legendary player while his brother thanked Gambians and the world for the love showed to his late brother in life and death.
The player was then laid to rest at the Jeshwang cemetery witnessed by thousands of mourners.