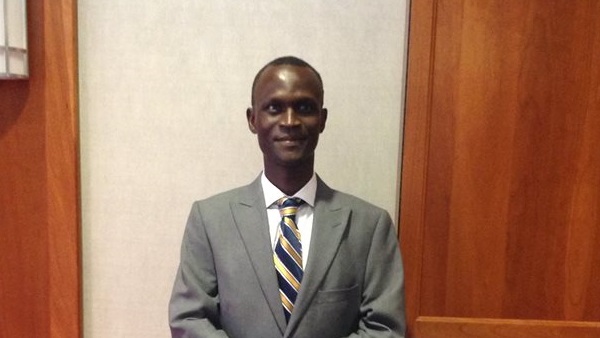 Lamin Keita, a Gambian PhD student at the Northwestern University in the US, has said that President Adama Barrow’s sudden deviation from the coalition agenda threatens the country’s new found democracy, alleging that it is quite apparent that the State House is now sanctimoniously turned into political theatre.
Speaking to The Standard, the political science student said although he is with the fervent belief that it is easy to develop a country like The Gambia with a population less than 2 million people.

“Barrow must not take State House for little chit-chat ‘Bantaba’ only to project his political goals while ignoring the sick and the poor who are struggling to make ends meet.
“It is therefore apparent and incumbent upon all Gambians, notably President Barrow to see the future of our country instead of seeing the short-term benefits because history is also about to indelibly record one’s name for good or worse as it has for Jammeh and the rest,” he highlighted.

The Gambia, Keita added, is a “ticking bomb” after transitioning to democracy, “What has happened since January 2016 is a longstanding assumption about how democracies can—and should—emerge in the aftermath of 22 years of authoritarian endurance in The Gambia. Even the neoconservatives, who seemed passionately attached to the notion of democratic revolution, told us, post-dictatorship is never easy and would take a generational struggle for consolidate democratic norms to gain root. This is why people are often asked to be patient.”

Keita said things that had held back The Gambia include an ineffective and corrupt state and a society where leaders cannot use their talent, ambition, ingenuity to effect the needed change.
“However, we all recognize that the root of these problems is political. All the economic, institutional, constitutional and even security reform impediments we faced stem from the way political power is exercised and monopolized by the few elites,” he asserted.

Keita added: “We all understand the executive are the first that have to change. Overall, these transparency initiatives are a welcome step in the right direction towards greater government accountability. Departments must be made more accountable in each functional area, and the public can track progress, costs and changes in how the government at all levels interact with its citizens”.
He said the country is facing lots of challenges and that the task ahead, given the fact that the old regime also wants to make a comeback.

“This kind of malady is a rock bed that is extremely difficult to uproot in our system unless we have a committed, sincere and influential leader surrounded by competent technocrats to avert this problem. If not, thus the country will slide back into what we fought against two years ago—dictatorship.