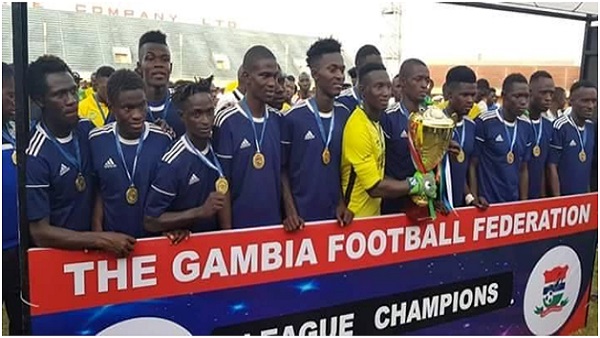 The 2018 / 2019 league season ended Sunday night with Brikama United marching to yet another league title, the second in the club’s history, and even under strenuous circumstances.

According to diverse opinions from the town, this recent success boiled down to the firm stance and support the town accorded to the team coupled with the never tiring commitment of the sports committee.

The last two seasons particularly have not been the highest in terms of player quality at the club but the dedication and hunger of the present crop of players and the indefatigable work rate of their cool and greatly skilled coach.

Since his induction as head coach, Modou Lamin Nyassi did what many Gambian coaches in the domestic league couldn’t pull.

Even though his team’s quality is no where near a league winning side Nyassi put his managerial skills to work and transformed his players into gold medalists.

In his first season at Brikama United Nyassi finished 3rd in the league and was finalist in the FA Cup against Armed Forces.

In his second season, this year, he managed to win the league title at a time when two of his formidable starters in Hamidou Bojang and Ebou Kanteh left the club.

Brikama of course is no stranger to big challenges in football and it is widely believed that the recent success will once again reunite the town to prepare club for the African Champions league.

Brikama made starling debut in that competition 7 years ago when they were the champions of The Gambia.

The circumstances of course at the time and now are different. The composition of the team, euphoria, enthusiasm around the team, the community support and the backing of the then sport committee of former president Bassiru Barjoe ensured a great and exciting moment of football in Brikama.

It is increasingly clear that the corona virus pandemic has entered deeply into the fabric of our society. One only needs to follow the...
Read more
Sports

Beatrice Allen, the first Gambian to hold the prestigious position of member of the International Olympic Committee,IOC, has ended her tour of duty. She...
Read more
Sports

The famous former executive director of the National Youth Council Lamin Darboe has spoken for the first time about his removal from the council...
Read more
- Advertisment -