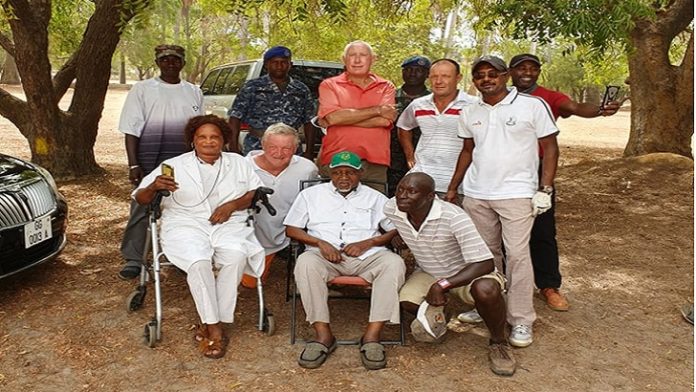 Old habits die-hard and this is much more true in sports than any other endeavor.

Former president Sir Dawda Jawara’s love affair with golf still grows despite his age and apparent knowledge that he may never tee- off again at the famous Fajara club.

Over the weekend, Sir Dawda defied his advisers to make an impromptu visit to the golf course where played regularly and promoted the sport among locals and expatriates.

Sir Dawda’s last memorable trophy was the senior prize which he won in April 1994 in the Pro-Am tourney of that year.

One of the young Gambians who took great interest in golf then and still playing is Tony Tabbal.

He was playing when he saw the former president arrived.

”Playing down fairway 12, I noticed Sir Dawda Kairaba Jawara with his aides sitting around the brown next to the official cars.

What a pleasant surprise that was.

It simply boosted my morals in the game just seeing him there.

After a brief conversation with him, I noticed how sharp his long term memory was.

He is indeed the one that made golf in the Gambia what it is today.

That was an excellent visit and hope it becomes a routine,” Tabbal told The Standard.

Similar sentiments came from Fajara club chairman Ram Mohan and members who were all visibly moved by the sight of Sir Dawda who they credited for raising the profile of golf in the country.