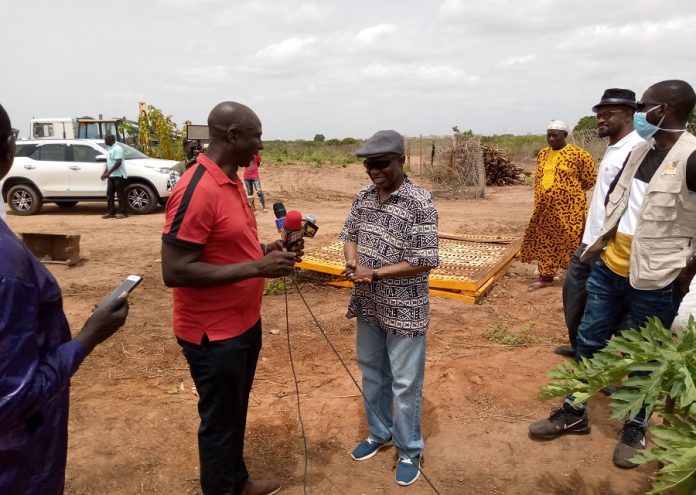 The leader of the United Democratic Party (UDP), Ousainu Darboe last Sunday visited a local farm in Tubakuta owned by a Gambian US-based civil servant.
The 25-hectare farm located in the outskirts of Tubakota is one of the biggest farm in the area motivated to make Gambia a food self-sufficient country.

Agriculture is the most important sector of the Gambian economy, contributing 32% of the gross domestic product, providing employment and income for 80% of the population, and accounting for 70% of the country’s foreign exchange earnings.

But agricultural production has declined throughout the 1990s as a result of several factors including poor rainfall distribution, weak marketing infrastructure, lack of access to credit (especially for the youths and women) and a limited resource base.
Speaking to journalists shortly after taking a tour of the huge farm, the UDP leader, who visited the farm with a delegation of lawmakers and senior party executives said he was very impressed with what he has seen and encouraged the initiators to keep up the momentum.

“I came with two lawmakers from the National Assembly select committee on agriculture because the important things of the country are debated at the National Assembly and for them to come here and see things first hand will properly guide them to really advise and advocate on behalf of the farming community. When I saw this, I remembered Nienaber in Serekunda Nding – that land failed because of government’s lack of support. But I am convinced this one will not fail. I am sure failure will not be an option for Gikay farms. You are going to face success upon success,” he said.

He said agriculture “is not like the textile business – it is a capital-intensive business; it needs absolute government support.”
“I believe Gambians in the diaspora should come back and get involved in shaping the destiny of the country – people like Muhammed Jawara (Gikay’s farms CEO) could have just put their money in an interest making account to be collecting their interest at every end of term but that will benefit them alone. It is not going to produce communal benefits but this farm is producing communal benefits, the young people and women working here are benefitting,” he said.

He said the Gambian diaspora should not only be called the eighth region but they should be given that encouragement, facilities and opportunities “so that they can come back to The Gambia and invest in the areas of productions.”

“It is also hightime for us to revive or bring back the agricultural development bank so that the farming community can have financial assistance in order to carry on with their farming activities effectively. But in the meantime, before that is done, I think the government should really make it a policy that the commercial banks finance agricultural activities and not charge commercial rates of interest. So that people in this type of venture can have financing to carry on with their farming activities.

“I want to suggest to the ministers of agriculture and finance to work together and convince commercial banks to provide credit facilities to the farming community at the rate of interest that is really affordable. This is the only way we can be able to show the whole world that agriculture has a vital role to play in the economic development of this country and when the economy is developed, we have improvement in all other sectors,” Darboe said.

Member for Jangjangbureh
The National Assembly member for Jangjangbureh, Momodou Ceesay, said he will make “it a point of duty to encourage the minister of agriculture to visit the farm. I believe the government should go out and look for people who are venturing in such initiative and see how best they can be helped to explore.”
He said the issue of agricultural development bank was discussed at the parliament and that they will henceforth “take it very seriously to ensure that it is done as soon as possible.”

Farm Manager
The farm manager and former technical expert at Songhai farming training centre in Chamen, Audu Makpa, said they started with the planting of papaya, okra, watermelon and pineapple. He said the farm gets its seeds from Thailand and Benin.
Makpa said the two and half hectare of papaya if harvested will give Gambian consumers the opportunity to purchase the nutritious fruit in the market at a very low price. He said the farm is currently facing constraint of water supply as they only have one borehole supplying over two hectares. He said they are also planning to start a 100-hectare rice farm in URR very soon “if we have the needed support – the land is already there waiting.”

“We want to call on the government to give us support in our endeavour to make Gambia a food self-sufficient country. I will also encourage other Gambians who have the means to invest in agriculture and support young people who are committed to farming because you cannot call yourself a millionaire when you don’t create a single job,” he added.
He revealed that four out of the five young men working at the farm are trainees of Songhai Initiative in Chamen.

He added: “So really, we have young people who are ready to work but they don’t have the opportunity. What we normally do here is to train them and allow them to go without any financial support or whatsoever.”
Mr. Makpa concluded by saying that the farms in Tubakuta, Pirang, and Keneba Kantora will go a long way in helping to address the unemployment issues in those communities.

Farm operation manager
The Gikay Farms operation manager, Sanusi Touray described Ousainu Darboe’s visit as unprecedented.
“Over six years we have been knocking doors but we could not find anyone who will come here to see what we are doing and Darboe has once again demonstrated his patriotism and love for country,” he said.
Sanusi said the need for the government to invest in agriculture cannot overemphasised. “This country spends over D80 million on rice importation every year. This is unacceptable and has to stop.”

CEO
The chief executive officer of Gikay Farms, Muhammed A. Jawara said: “I decided to invest in agriculture in order to be able to contribute to the socio-economic development of the country. I call home.”

“Due to the immense challenges facing the Gambia ranging from rural to urban migration, the migrant crisis in the Mediterranean which affects many young Gambians across the spectrum, the high unemployment rate, and the widening of the income gap, I believe investing in agriculture will go a long way in stemming the tide against these challenging economic and social issues that need to be tackled by all of us,” he added.

He continued: “The role of the government is to provide a conducive environment for businesses to thrive. Our expectation is for the government to have clear and concise policy positions driven largely by pragmatic and result oriented actions. A start-up business like ours cannot succeed in any country without having the support and the political will of the government.”

“We implore the ministry of agriculture and other stakeholders to open their doors to us and other entrepreneurs in the agricultural space in order to complement the efforts of the government to provide employment for young people, empower women, and eradicate poverty in our communities. We want to revolutionize agriculture in the Gambia for posterity and we cannot accomplish that objective without the active involvement of the government.”

Mr Jawara said he felt honoured and grateful to be able to have the opportunity to invest in a country that gave him so much at his early age.
“I consider the opportunity to invest in the Gambia as a way to pay back to the country that gave me so much in the beginning. I feel great about this and I am encouraged by the support we are getting from the communities we serve. I have no doubt that the Gambia will turn a corner if more Gambians follow my footsteps in agriculture. It is important to note, however, that many Gambians who may be interested in venturing into agriculture and other areas of investments have genuine concerns about the challenges that come with investing in the Gambia. These myriads of challenges are real and must be addressed by the government.”

“Most people do not want to invest in an environment with rampant bureaucratic red-tapes and lack of support by the government. This is why it is crucial for the government to provide clear political and pragmatic policy positions that will encourage other Gambians to invest in agriculture and other areas.”

Darboe’s visits
He said the UDP leader’s visit to Gikay Farms is a watershed moment in their journey.
“To have someone of his calibre visit the farm under difficult circumstances after failing to have a single person from the ministry of agriculture visit after four years of trying means a lot to us. We are humbled and grateful to welcome a statesman like him and we are encouraged by the moral support he gave us during his visit.
“We implore leaders of other parties and other stakeholders to show similar support to Gambian entrepreneurs across different industries even when it is not convenient to do so,” he added.

Globally, more than 47 million COVID-19 cases have now been reported to WHO, and more than 1.2 million people have lost their lives. In...
Read more
- Advertisment -