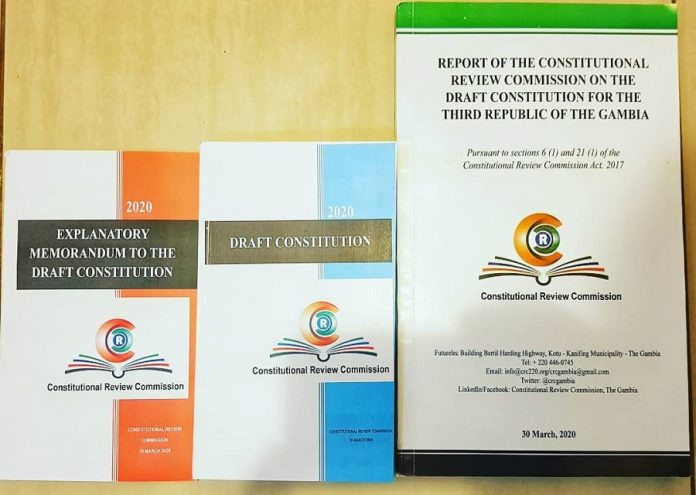 Constitution Bill 2020, which failed at the second reading in the National Assembly about two weeks ago, is still raging on, with the supporters of the Bill and its opponents throwing aspersions and blame at each other. However, the outgoing Chairman of the Constitutional Review Commission (CRC) Justice Cherno Sulayman Jallow has urged supporters of the draft not to despair saying that “the Draft Constitution that Gambians worked so hard on, expending invaluable time, energy and resources, is not dead; it has merely hit a snag and is placed in cold storage.” He seems to have the confidence that someone would one day revive the Bill and get it passed into law.

While everyone seems to have had their own interpretation as to why the Draft failed to get through, despite all the resources and efforts put into the process, but it is quite obvious to any genuine analyst that it tantamount to a serious policy failure by the government, and in any democracy, such policy failure should have attracted some consequences.

However, considering the obvious fact that President Adama Barrow and his administration were not quite enthusiastic about the passage of the Bill, one would be excused for assuming that the scheme to kill the Bill was hatched at State House, with the full connivance of some members of the executive. There is a general consensus that apart from the members of the APRC, whose sole objective was to protect the legacy of their Supreme Leader, the other members who voted against the Bill had their own vested political interest in doing so. Why would only those who have expressed their full support for President Barrow’s agenda vote against the Bill as if they were cleverer than the rest of the National Assembly members in seeing the negative clauses of the Draft?

As regards the role of the Attorney General, who had been accused by some people of putting up a lackluster defense of the Bill during his intervention after the debate, it would not be quite fair to accuse him of connivance in the scheme to kill it. Apart from him being a brand new player in the process, he may have also lacked the experience and institutional memory to do more than he did. There is no doubt that his predecessor, Baa Tambadou, the initiator of the process, would have done a much better job in defending it.

However, from the debate, one could clearly discern that President Barrow’s supporters had already made up their minds to kill the Bill and no matter what anyone said, they were not likely to change their minds. It was quite obvious from the shallowness of their arguments that a majority of them either did not care to read the Bill and the accompanying justification submitted by the CRC or they did not have the capacity to understand what was in it.

In his intervention however, while the Attorney General tried to be as objective and fair as possible, but in an apparent reaction to the attempt by some Western diplomats to influence the vote in the National Assembly, he told the members that apart from two vehicles donated to the CRC by UNDP, the government financed the whole process. He was apparently indirectly telling them not to allow themselves to be swayed by the Western diplomats, as they did not have much stake in the process.

However, during the CRC’s last press conference on 1st October, the Chairman, Justice Cherno Sulayman Jallow seems to have contradicted the Attorney General’s position that apart from the two vehicles from the UNDP, the whole process was funded by the government. “In July 2018, through the benevolence of the UNDP in partnership with the International Institute for Democracy and Electoral Assistance (International IDEA), the Commissioners and the Secretary were invited to a one week orientation programme at The Hague at no cost to the Gambia government.” He also went on to say that the UNDP later again provided the CRC the necessary furniture, including “desks, chairs and a conference table- desktop computers, printers (including two heavy duty printers), stationary and filing cabinets.” He added, “I thank our external partners: the UNDP who, apart from the assistance I mentioned earlier, also provided funding in excess of D10 million dalasis to undertake our internal public consultations, US$40,000 to our external consultants and D3.8 million to support our technical committees; they also provided us with one vehicle (a Toyota Prado) and paid the first year’s rent of the CRC’s premises. Their assistance has been invaluable to our work.

“We also thank the European Union for their support and outreach to the CRC and for placing The Gambia’s transitional justice in relation to constitutional review high on their agenda. I thank the Government of Qatar for the financial support they gave to the Government, of which the CRC became a beneficiary. I thank ECOWAS for the financial support they provided which enabled us to launch and continue with our periodic CRC Newsletter,” he said.

Therefore, from the above quotations, it is quite clear that the UNDP, in particular contributed much more than two vehicles and several other donors also contributed to the process. There is however a possibility that as a new comer, the Attorney General was not given the correct picture, probably by people who had some vested interests in seeing the Bill defeated.

Among the areas contested by opponents of the Bill were its alleged retroactive nature, which they said denied President Barrow the opportunity to go for a third term if he wins the 2021 elections. However, there is another area that no one seems to talk about but which could have been an important factor in President Barrow wanting to stay with the 1997 Constitution. That is the power of the President to nominate five members of the National Assembly. We can recall the humiliation that he suffered in the courts when he attempted to remove Ya Kumba Jaiteh as a nominated member and replaced her with one of his supporters. It is therefore possible that he would like to once again get the opportunity to remove Ya Kumba at the end of her term and deny her the opportunity to get back to the National Assembly in that capacity, and with the 1997 Constitution, he is assured of such a power. Of course, if the Draft Constitution had passed, it would have done away with nominated members, but it is possible that President Barrow would get more satisfaction in replacing Ya Kumba with a person of his choice.