‘Ecomig is not an occupying force’ 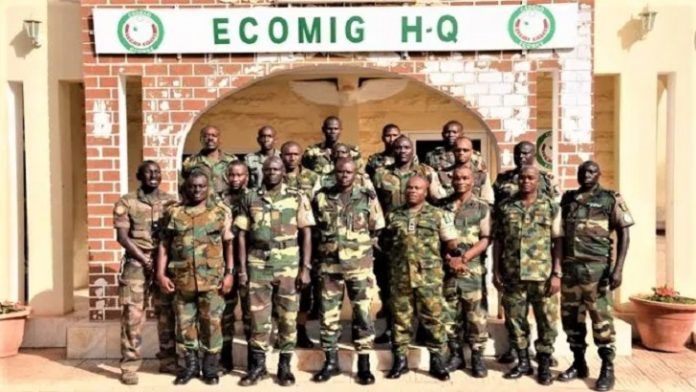 The government spokesperson, Ebrima Sankareh, has stated that the West African troops in The Gambia, Ecomig, is not an occupying force and that journalists and Gambians should avoid reporting or making false statements about its presence in the country.

“It is worrisome that even among our security forces, some of them are unbecoming. I don’t know whether it is narrow nationalism or what. This is not an occupying force because the Gambia is not under siege. It is not only Senegalese forces – we have Ghanaians and Nigerians,” Sankareh told journalists at a joint ministerial press conference last Friday.

He added that people were peddling false information on the internet that Gambia was spending millions on the maintenance of the Ecomig forces in the country.
“This is totally inaccurate, the monies are paid by the European Union,” he said.
He said the Ecomig forces were deployed into the country to protect President Barrow, people of the country and the sovereign integrity of The Gambia.

“We knew about the looming dangers that led to them coming here. They have a mission to help to maintain the sovereign democracy that we all fought for and to suggest otherwise is really speculation,” he added.

Sankareh added: “When these people came to the country, they havd a heroic welcome and for all I know honestly, unlike other trouble spots in the world where we see peacekeeping forces make the headlines on the BBC for doing bad stuff to people – raping women here and there. These people, you don’t even feel their presence in the country unless you travel outside the country. There is an antecedent to their presence in The Gambia – we had a president who lost an election, conceded defeat and last minute he decided to recant his concession. The Gambia was on the brink of war. The world leaders converged in New York and elsewhere in Western capitals – in Senegal – in West Africa touring in and outside of The Gambia many times. A compromise could not be reached and that is why it was called an impasse. Consequent to the impasse they decided that for sanity to prevail we had to have forces here that would fix the situation until at such a time that we feel the fragile peace is being fixed.”

“We appeal to all journalists and citizens to keep the word going that in this country we are one and the same people. In this two week there has been a lot of peddling on the internet about tribalism, ethnicity, insulting people – some very reprehensible remarks. We have seen this in the old dispensation and we thought the idea of name calling of ethnic groups would have been history in this country.

“The Gambia is almost a very unique situation – we inter-marry and do everything in this country together. If it is time for Christmas or Ramadan you don’t know who is Christian or Muslim. As ethnic groups; Jolas, Fulas, Mandinkas and Wolofs, these are all social constructions – at the end of the day your ethnic group doesn’t determine your intelligence, your handsomeness or ugliness and doesn’t determine your citizenship. It is who are you that defines you,” Sankareh stated.

He appealed to journalists to avoid interviewing people who make remarks that are reprehensible about ethnic groups.
“Nobody is superior to the other but nobody is also inferior to others. We are all citizens. We have seen Jawara, Jammeh and Barrow from very modest backgrounds becoming presidents. I think even God has taught something that there is humility in even selecting leaders. We have people with PhD contest and they don’t even have five votes. In the coming weeks the government will engage religious leaders to try to address these issues,” he added.