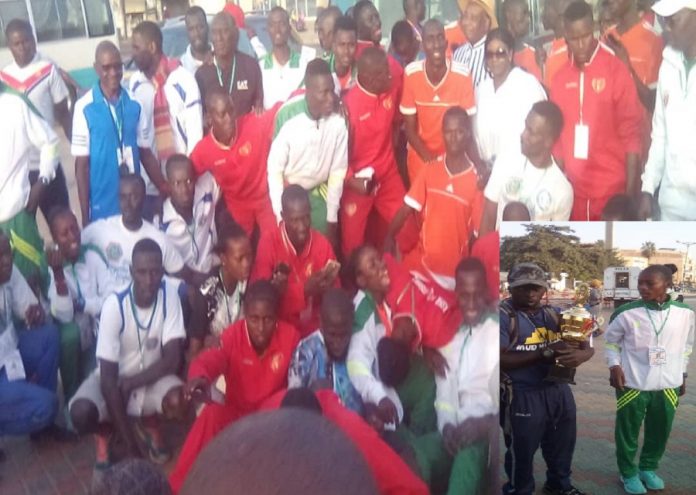 More than 100 runners and officials from Gambia and Senegal over the weekend completed the 300km distance from Barra in the Gambia to Dakar in Senegal. They came from 3 Gambian and 2 Senegalese teams with each providing a dozen runners who took turns to race the distance in three stages and days. The first stage ended in Kaolack; the second in Mbour and the final stage at Colobane in Central Dakar.

At the end of the race in Dakar Sunday, Senegal’s’ Army team Asfa were declared winners for the second time while the Gambia National Army came second and the Gambian Ministry of Sports came 3rd.

A new group Team Mbour participated for the first time. This year women runners were introduced with two selected each team to start the run in each of the three segments of the run, Barra, Kaolack and Mbour.

This year the second segment from Kaolack ended in Saly, the tourist resort near Mbour.
In Dakar the Gambian Ambassador in Senegal Ebou Ndure attended the finish line ceremony representing the President. The executive director of the Senegalo-Gambian Secretariat Fode Seck effectively took part and started the run at each of the three segments.

Like the maiden edition last year, this year’s edition too was full of excitement, discovery and exploration. At the end of the 1st leg in Kaolack the organisers awarded certificates of appreciation to Sering Mboup the President of the Kaolack Chamber of Commerce and Aja Musukoro Mbaye the chairperson of the Senegambia Women Association.
In Mbour certificates of appreciation were awarded to the Mayor of Saly, thé Mayor of Mbour and the Chairman of the Saly Hotel Association.

As part of the run, a 5-kilometer for Primary schools and a 10-kilometer races were organised in Fatick attended by the Prefect and deputy Mayor of Fatick.
Mr Gomez, the founder of the Run and chief coordinator informed them of plans to start an annual Fatick Marathon to start from Passy over the new bridge when it is completed, and finishing in Fatick.

The Run is a dare devil adventure that was first explored last year to a successful debut. It included vigorous campaigns and rigorous preparations including mobilising a technical team from both the Senegalese and Gambian athletics associations, under a central logistic coordinating team over seeing transport, accommodation and other things.

The Senegambia Run for Integration is the longest road race in Africa and is designed to promote sports tourism in The Gambia and Senegal. It was first held in 2019 and is the brain child of veteran Olympic official George Gomez and organized by Camp Africa with collaboration of the Gambia Athletics Association among others.

- Advertisement -
Share
Facebook
Twitter
Pinterest
WhatsApp
Previous articleEnd the siege and stabilise The Gambia
Next articleUrbanization and its perils: The Gambia is witnessing the end of its safety net?— the “compound” institution
Join The Conversation