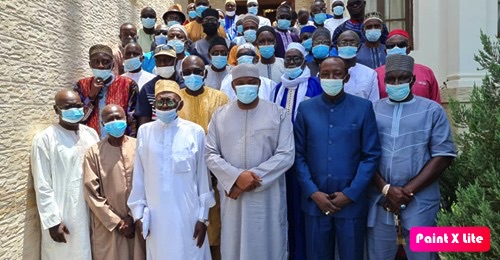 President Adama Barrow on Saturday received in audience over 50 former national assembly members and governors representing the newly formed Former National Assembly Members Association, most of them, from the former ruling party APRC.

The delegation was at the Presidency to express their loyalty and support to President Adama Barrow and their readiness to mount a formidable team for his re-election on December 4th 2021.

According to a statement from the National People’s Party NPP, the team highlighted gains in democracy, good governance and the mammoth infrastructural development ushered in by the Barrow’s administration as development oriented politics and call on all Gambians to rally behind President Barrow and to massively vote for the NPP. “The experienced consortium further asserted that the primary goal of their group is to compliment and collaborate with the National People’s Party for an unprecedented election victory for President Barrow,” the NPP statement added.

In his address, President Adama Barrow welcomed the initiative and commended them for their steadfast and resolute in supporting him. The meeting according to the President is historic citing the vast experience acquired by the veteran-politicians will undoubtedly add value to his party’s political trajectory. He assured them of his support and urged them to continue to work as a team and to collaborate with all NPP structures to mount an all-out campaign team that will stand the test of time. The group also presented their work plan to the President and they are set to embark on a nationwide tour.