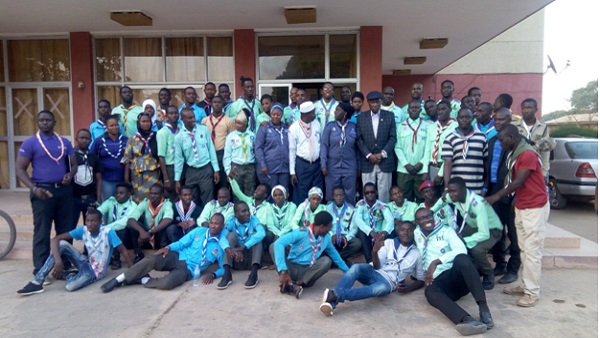 Gambia Scout Association recently completed a training for 70 junior and senior scouts on Advance Woodbadge Training Level and Assistant Leader Trainers (ALTs).
The training came courtesy of the World Scout Bureau Africa Support Centre in Nairobi, Kenya, through Scout Messengers of Peace Initiative.
The idea for a capacity building training programmes was floated after the scout association concluded its ‘need assessment survey’ and found out that there was a gap in the capacity of adults who were supposed to be leading these young scouts after recruitment.

Omar Jarju, international Commissioner of the Gambia Scout Association, said: “We invested in a process of non-formal education through a specific value system. We help girls and boys become the principal agents of their development as committed, responsible, self-reliant and supportive persons.”
According to Commissioner Jarju, the mission of Scouting is to contribute to the education of young people, through a value system based on the Scout Promise and Law, to help build a better world where people are self-fulfilled as individuals and play a constructive role in society.

“For this reason, we have signed an MoU with the Ministry of Basic and Secondary Education to take scouting to every school and to the door step of every young person living in The Gambia,” he stated.
He said sustainable national development is “a priority for the scout mission”.
“We are aware of the need to constantly address the issues of our social needs, and are prepared to meet the challenges.”

Ms Fatou Jallow, the chief commissioner of Gambia scouts, said the Robert Baden-Powell movement – which began in the early 90s – has remained the “largest educational youth movement” in The Gambia, with a membership of more than 15,000.
She said since the founding of the movement in The Gambia in 1921, it continues to play “a very constructive and educational role” in the advancing of youths’ lives in the country.
“The 30 people trained on Assistant Leader Trainers (ALTs) at the end of the day will be responsible of training the members of the Gambia Scout Association once they are certified by the World Organisation of Scout Movement through the Africa Support Centre,” the commissioner explained.

According to her, the movement has a goal of registering 25,000 members by 2020. She explicated the motive behind that aspiration: “The World Organisation of Scout Movement has a membership of over 60 million people, and has set a target of getting 100 million members by 2023. The Gambia Scout Association, being a member, has a role to play in making that dream achievable. We can only achieve that through such trainings to capacitise our leaders.”