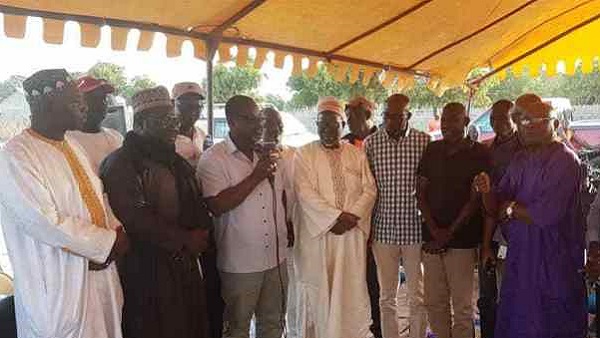 The Gambia Football Federation (GFF), on Sunday handed over a project for the construction of a modern mini stadium in Gunjur, Kombo South to the contractor and consultants. The project was handed by GFF president Mr. Lamin Kaba Bajo to Fenta Consultants and Architects who in turn handed it over to the contractor, Jala Kolong Enterprises in a ceremony held at the site.

When completed the building will have a new grass pitch, uninterrupted water supply, a standard pavilion, changing rooms for players and referees, press room and offices among other facilities.

Speaking at the event, Mr. Bajo urged Gambians to close their ranks and work together for the development of football in The Gambia taking as an example countries like Cape Verde and Mauritania whose national teams are today ahead of The Gambia which used to beat them. He lamented that while Gambians continue to fight amongst themselves, those countries were busy working hard in developing all facets of their game. Mr Bajo said good infrastructure would close the gap between the Greater Banjul Area and the regions in terms of quality. “So if these communities have had a better infrastructure, we would’ve been saying a different story today. The kids that would start to play on this pitch once it is completed will be the luckiest because they would have had the best infrastructure and then we will also be in our comfort zones of retirement, life permitting, with history judging us well for being part of that process,” he said.

Mr. Bakary K. Jammeh, the GFF First Vice President and its Fifa projects manager, said despite the widely held view, there was never a golden age for Gambian football, noting that even though we have the heart and desire, as a country, to do so, we do not have the readied materials to achieve it, notably because we lack players of the highest quality playing in the best leagues in Europe.

He said when the current leadership took over at Football House, there were series of issues that they were confronted with and they had to be addressed if they are to achieve their objective of football development. He added that these includes weak leagues and clubs as well as the national league concentrating in the Greater Banjul Area. He further noted that as a result of this, our second division clubs have no chance of winning the FA Cup. The infrastructure, he added, is lagging behind but the new direction is to play league matches from Kartong to Koina as well as to empower the regional football associations.

“We are agents of change thus we think of tomorrow and that is why these projects are long term, which sometimes can bring impatience, but we are still committed to the same course. We are improving the facilities at Stadiums within the Kanifing Municipality and new mini stadiums will be built from scratch in Kuntaur, Bullock, Kwinella, Bansang and Basse,” he said. “The Gambia is a model for project implementation at FIFA and this is why we are always selected to do presentations for Africa and FIFA events.”

Baboucarr Samega Janneh, the Principal of Fenta Consultants and Architects, said the design of the pavilion is done in such a way that it will accommodate all the facilities that are expected to be in place. He urged the people of Kombo South, and Gunjur in particular, to ensure that the GFF has value for money.

Kebba K. Barrow, the national assembly for Kombo South and Majority Leader of the National Assembly tasked the Gunjur Sports Committee to ensure that the trust that the GFF leadership has in them is jealously safeguarded. He assured the Federation that he would personally do everything within his means to ensure that a good job is done for his people.

Dembo Darboe, the representative of the Alkalo described the project as a pleasant surprise and thanked the GFF for its foresight in developing football in The Gambia and choosing Gunjur as a beneficiary community while tasking the youth of the village to take ownership of the project.

Yaya Drammeh, the assistant public relations officer of the Gunjur Sports Committee gave the vote of thanks and commended the GFF for bringing such a development project to the community.