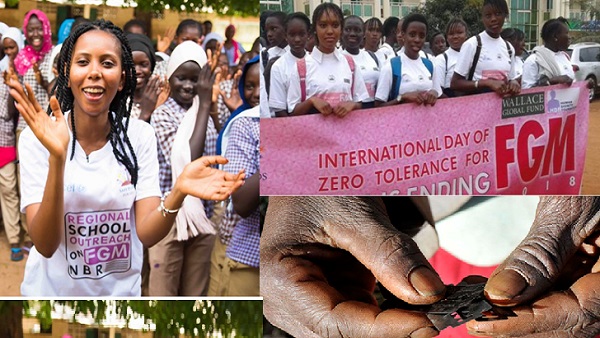 Celebrations marking UN-sponsored annual International Day of Zero Tolerance for FGM were staged at QCity, Bijilo.
The awareness day that takes place on every 6 February as part of the UN’s efforts to eradicate female genital mutilation. It was first introduced in 2003.
In The Gambia, the day was marked by local NGO Safe Hands for Girls, with a screening of the documentary of their executive director Jaha Dukureh. The documentary dubbed “Jaha’s Promise”, depicts the life and activism of Jaha herself.

Jaha Dukureh said observing the day meant that there is still hope in fighting FGM in The Gambia and that if this hope is put into action, The Gambia can become the first country to totally eradicate FGM. This, according to her, will set an example for other countries where FGM is practiced, to follow in our footsteps.
Speaking on the challenges in her crusade to ending the age-old practice, Jaha named “discrimination and isolation” as two things she had to go through.
“No one would talk to me during ceremonies or pray beside me in the mosque”, she lamented. She added that her “contradictory” views against the practice caused her “a lot of things”.

She said one of her “biggest challenges” was how to break the ties the people of The Gambia created between the practice [FGM] and the Islamic religion.
She added that religious leaders have a predominant role to play in aiding to eradicate FGM but some claimed that the practice is in fact “religious.”
Speaking to one of the most influential Imams in The Gambia, Jaha stated in the film that this was one of her most difficult visits. “I was afraid because of how he treated other activists”, she said.

She lauded former State House Imam Abdoulie Fatty for his comments in an interview in 2015 as “quite helpful” in the fight against FGM. She said those comments helped change a few peoples mindset.
She added that the Imam’s statement on FGM being a matter of choice is one which “could be used to convince people” that the practice is not one which is imposed on them.
Next on the agenda for Jaha now is to “make sure” that the legislation passed in 2015 banning FGM stays put, as concerns were raised after “some individuals in some communities” were said to have requested for a lift on the ban from the new government.