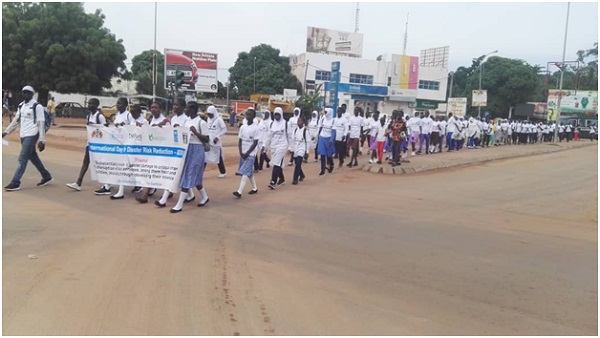 The National Disaster Management Agency (NDMA) and partners commemorated the Day last Sunday with a procession from West Field to the NDMA offices.

Dignitaries and students from various schools attended the event.
Globally, 13th October has been designated International Day for Disaster Risk Reduction by the UN General Assembly, to promote a global culture of disaster reduction, including disaster prevention, mitigation and preparedness.

The Day serves as an opportunity to acknowledge progress made towards reducing disaster risk and losses in lives, livelihoods and health.

The day also reflects on how people and communities are reducing their risk to disaster and raising awareness about the importance of disaster risk reduction to improve lives, empower communities and build the resilience of everyone.

Speaking on behalf of the UN coordinator, Ms Wanja Kaaria, World Food Program rep and country director, said The Gambia is no exception to experiencing recurrent disasters, both natural and human-induced ones over past years.

She recalled the recent windstorm which affected about 20,000 people in communities in URR and CRR, rendering some homeless, and bringing “deaths and general devastation”.
The deupty executive director of NDMA, Serign Modou Joof, said the NDMA stands in solidarity with the 74,226 people affected by various hazards, and huge destruction to some critical infrastructures.

“More than 3,769 households have lost part of their houses and 1,708 have completely lost their homes, thus resulting to the displacement of 2, 778 people. Public facilities such as hospitals and schools were not spared; roads and bridges became unmotorable, while farmlands became submerged. Those affected became traumatised with little hope thus increasing their level of vulnerability,” he noted.

He promised that the NDMA will continue to work “tirelessly” with partner institutions to address the short and medium term needs of those affected.