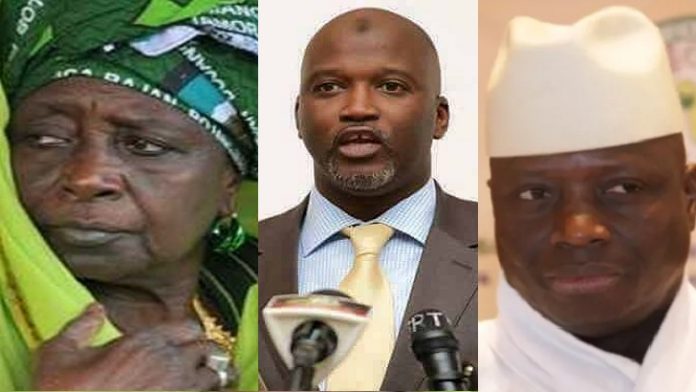 Former President Yahya Jammeh has been prevented from receiving over D2Million from his late mother’s inheritance at AGIB.

According to reliable judicial sources, Jammeh recently authorized that the sum of two million, two hundred and eighty-four thousand, three hundred and eleven dalasi, fifty bututs (D2, 284,311, 50) at the Arab Gambia Islamic Bank be withdrawn by one Mbye Kah.

The letter addressed to the bank read: “I Sheikh Professor Doctor Yahya AJJ Jammeh, former President of the Republic of The Gambia, being the only child of the late Ajaratou Fatou Asombi Bojang, who passed away on the 27th July 2018 in Malabo Equatorial Guinea, hereby authorize Dr Mbye Kebba Kah, former Imam of State House Mosque Banjul The Gambia to withdraw on my behalf the money deposited by my late mother in the account at AGIB Bank Ltd, Account Number; 201-2170-5673-8374 amounting to D2,284,311.50 (two million, two hundred and eighty four thousand, three hundred and eleven dalasi, fifty bututs). The death certificate is hereby attached as it is required.

I pray that you act expeditiously to enable Dr Mbye Kebba Kah (formerly Imam State House Mosque, Banjul) to withdraw all the funds in the above-mentioned account and close it on my behalf.

Enclosed is the death certificate of my late mother dated 27th July 2018. May the Almighty Allah bless you all.”

However, the Minister of Justice, Abubacarr Baa Tambadou, has confirmed report that his government has forfeited to the State money ex-President Yahya Jammeh inherited from his late mother.

Minister Tambadou explained: “He (Jammeh) claimed the money belongs to his late mother.

The Cadi Court granted his application for the bank to pay the money to him.”

He added that since the money now belongs to Jammeh, the Government decided to forfeit it to the State.

Yahya Jammeh left the shores of this country in January 2017 following a political impasse that left the country tethering on the brink of war.

A commission of Inquiry set up by President Adama Barrow in July 2017 has made adverse findings against the former Gambian leader after it held that Jammeh stole over three hundred million United States Dollars.