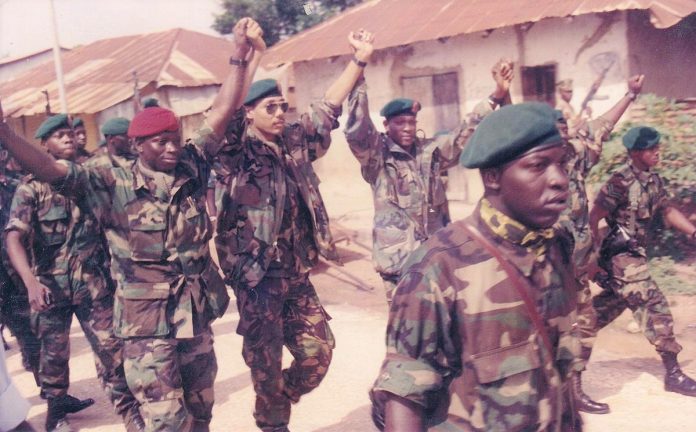 The evening of July 22, 1994 brought the members of the Gambia security forces closer to understanding who the leaders of the coup de tat were, but not with absolute certainty. Lt. Edward Singhatey had tried to clarify who the architects of the coup were to the officers and other ranks of the Gambia National Army (GNA) and Gambia Police Force (GPF) in attendance of the first meeting held at the State House.

He told us how the five young GNA lieutenant and sub lieutenants under the leadership of the late Lt. Basiru Barrow (RIP) first met during the military exercise held in March 1994 and agreed in principle to overthrow the PPP government. He named the five as 2Lt. Sana Sabally, 2Lt. Alagie Kanteh, 2Lt.

Alpha Kinteh and himself, 2Lt. Edward Singhatey. Their decision later was to do it on July 22, the day President Sir Dawda Kairaba Jawara was scheduled to return to the Gambia from England.

“But”, Edward Singhatey went on, “Barrow, Kanteh and Kinteh betrayed us as the date drew closer.

“That was when Sabally and I decided to approach more reliable officers and eventually got the cooperation and support of Lt. Yahya Jammeh and 2Lt. Sadibou Haidara to join us.”

Singhatey went on to underscore the inappropriateness of any attempt to hold a meeting in the absence of 2Lt. Sabally and 2Lt. Haidara who were still out in the streets consolidating what could have been best described as their territorial and political gains.

To hear that Lt. Barrow was supposed to be their first leader never came as a surprise to me; on few occasions while serving as company commander at Yundum Barracks, despite being his senior Lt. Basiru Barrow had actually sought my opinion and support to get rid of the PPP government by military coup.

He was mortally opposed to the political and economic policies of President Jawara’s government and had seen no remedy to its “rampant corruption” other than to effect regime change in the country. In the end, few, if there were any among the officer corps took him seriously when he raised the subject.

However, one day in April, about a month after the Kudang war games where the plot was consummated, Lt. Barrow, called me from Yundum Barracks seeking appointment to see me at the Ministry of Defense in Banjul. He wouldn’t give me a hint of the subject matter when I asked on the phone but only emphasized its urgency.

He came to my office the following day and explained his intention to quit the army if he didn’t get what he wanted by December 1994. He had wanted to go abroad for further studies and needed to know whether he could secure a government scholarship from the ministry.

I had never tried anything like that as liaison officer but I still gave him my word to explore the possibility if given time.

I cannot recall the course he would have studied but I think it was about advanced level in mechanics his area of expertise in the army.

We agreed that he would bring me copies of his credentials before anything could be started.

In the meeting, he raised his hand up in defense of the allegation of betraying his colleagues as revealed by 2Lt. Edward Singhatey.

“I didn’t betray you”, he denied. “I was not just comfortable with the timing and preferred the postponement of the date till later in the year.”

He never explained why but calmly assured everyone his willingness to leave the State House but before suggesting to Lt. Jammeh and 2LT. Singhatey to consider retaining my presence and that of Captain Mamat Cham’s to assist them in stabilizing the fluid situation.

Everybody in the room endorsed Barrow’s proposal and the two of us agreed to stay and work with them.

Then just when everybody was about to disperse, Sana Sabally and Sadibou Haidara suddenly arrived with their rambunctious guards.

Armed with an AK 47 and embolden by the jujus he was wearing, Sana alighted from his vehicle screaming at the top of his lungs for the meeting to stop or else he would start shooting.

“I will start a war”, he kept on shrilling all over the place.

Some officers spoke to him before he was back to his senses.

That was the second time that day to witness a very troubling side of Sabally’s temperament.

The Sana Sabally I used to know was a completely different person. He was always shy, kept to himself most of the time, constantly read the Quran and other thriller novels and, above all, was a very pious Muslim. One barely heard his voice when he spoke and would never look at anyone straight in the eye.

Twice the BATT commander Col. Jim Shaw had recommended his court martial and dismissal from the army, first from an accident at Kudang Village and second of an incident at Yundum Barracks that were not justifiable. The BATT commander just wanted to make him a sacrificial lamb.

He was the platoon commander at Kudang army camp where his troops out of boredom used to frequently go on hunting trips in the forest using their assault rifles and live ammunitions reserved for combat duties. Though illegal by all military standards, it was the army commander who gave the approval for the recreational activity long before Sabally was posted there.

Then that sad day in 1990, upon shooting down a bush hog that fell meters away from them, the camp sergeant, Sgt. Jarju, assuming that the animal was dead, rushed with a private soldier to get it. But just when they were about to grab the animal it suddenly sprang to its legs and started running away.

The private soldier panicked and impulsively pulled the trigger of his cocked weapon and fired a shot. The bullet hit and killed Sgt. Jarju on the spot.

Colonel Shaw as a result recommended that Sabally the platoon commander be held responsible for the accident. He concluded that it was a court martial offense. We eventually proved to Jim Shaw that it was not Sabally’s fault in that he acted on the army commander’s approval for the Kudang unit to be going out on hunting, using their personal weapons and live rounds well before the junior officer was posted there.

The case was finally dropped when Col. Shaw realized that some of us were not going to allow the court martial to happen without stiff resistance.

And as fate would have it again, in 1991, the second batch of the GNA soldiers’ demonstration coincided with Sabally being the duty officer in the barracks that day. The soldiers surprisingly came to the barracks at night and seized some arms and ammunition from the guards to start the mutiny the next day.
Col. Shaw again advocated for the dismissed or court martial of Mr. Sabally of which we again stopped on the demerit of the the proposal.

We had to do it for Sabally because of his impressive standard of discipline then.

But there we were on July 22, 1994, with 2Lt Sana Sabally transformed into a completely different maniac exhibiting acts of stupidity bordering on an insane suicidal mind.

I didn’t know what he was told and by whom but after calming him down, he later came to ask me not to leave but to stay and help them. I had definitely wanted to leave when he arrived with his rage.

He pleaded with me nicely to return soon.

I went to my house, checked on my wife and children and returned to the State House around 7:00 P.M.

Although they had relied on us, as captains to come up with the right ideas to forge ahead, our knowledge of what to do after a coup was nil.

We ultimately agreed on reaching out to Gen. Dada, the Nigerian commander for help who was at his house still angry about his removal from his command position.

He responded positively after being assured the chance to keep him in the country as adviser.

He advised us to start with the two most important things necessary soon after a successful coup de tat.

Share
Facebook
Twitter
Pinterest
WhatsApp
Previous articleTrade fair hailed as ‘biggest exhibition’ event in Gambia’
Next articleIs it safe for a pregnant woman to fast? Fasting for long periods may cause: headaches, fatigue, fainting, and losing the unborn baby
Join The Conversation