Karpowership Donates Food Items To 3 Orphanages In The Gambia 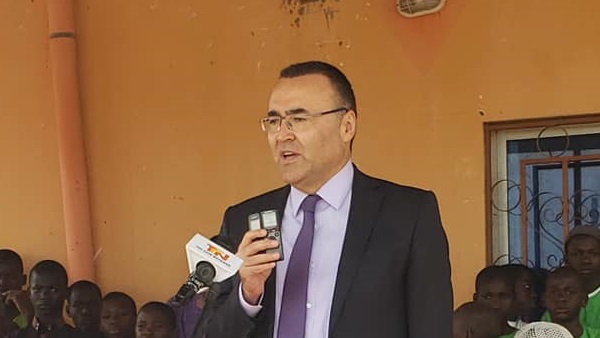 Karpowership, the Turkish power-generating company operating in The Gambia, on Friday, 19th April 2019, presented an assortment of food items to three orphanages and madrassas in The Gambia.
Ninety 50kg bags of rice, 15 20-litre drums of oil, 15 bags of onion and 400 loaves of bread were distributed to Al-Ihsaan Foundation School in Salagi, Madina Salam Centre in Gunjur and Jawharr School and Orphanage at Brufut Wullingkama in a ceremony attended by the Karpowership Regional Director for Africa, Mr Emre Durmusoglu.

In making the presentation to the heads of the institutions, the Ambassador of Turkey to The Gambia, His Excellency Ismail Sefa Yuceer, said the donation was a manifestation of the high premium Karpowership places on its corporate social responsibility.
Ambassador Yuceer stated: “Karpowership is part of Karadeniz Holdings which is a leading group of companies in Turkey. It is not only active in the economic life, it is also active in humanitarian issues in the countries that it operates in. As part of its responsibilities, Karpowership implemented many social projects in The Gambia over the last one year since it began operations in The Gambia.

“When the team from Karpowership came to the embassy almost one year ago to have a meeting with me, the one thing that struck my attention was their motto which was: To Make A Difference. Over the past year, they have made a difference in our lives here. They touched on our daily lives. They touched the economic life as well as the social life.
“Now we are having uninterrupted energy, uninterrupted electricity. So far we are experiencing fewer number of power outages in the country. For that matter, we should be grateful to the government of The Gambia and also to Karpowership. This is very essential for the country, for our daily lives. Secondly, the Regional Director [Emre Durmusoglu] told me that it is a principal business ethos of Karpowership to give back to the people and this [donation] is a testimony of that.”

Speaking earlier, the Project Manager of Karpowership in The Gambia, Mr Yankuba Mamburay, noted: “As a socially responsible company committed to the development of communities in The Gambia, we have already undertaken several activities in the country. Among them are the distribution of 200 bags of rice and sugar to the needy during Ramadan, last year, and the donation of US$2,000 to the National Environment Agency for activities during the International Coastal Clean-Up Day in September 2018. Currently, we are rehabilitating the water system at the premature babies unit of the children’s wing of the Edward Francis Small Teaching Hospital at a cost of US$6,000.”
He reassured that Karpowership will be committed to the development of communities in The Gambia for as long as it continues to operate in the country.

Al-Ihsaan
Muhammad Darboe, the President of Al-Ihsaan Foundation For Reviving Qur’anic Sciences & Helping The Needy, said feeding the 180 students living in their in their halls of residences in their five centres in Salagi, Sukuta, Kuloro, Gidda (Kombo East) and Darsilameh (Kombo Central) is their most daunting challenge. He said they raise funds through Facebook campaigns and engage in income generating activities like agriculture and poultry farming.

He thanked Karpowership for making a difference in the lives of Gambians since it began operations in the country. “We have seen the difference since you started in The Gambia. Most of our tutorials are done in the evenings and at night and it was very difficult for us. But since you started, we have been getting power regularly and we have been able to conduct our teaching in a convenient environment. We thank you very much for this help and we pray that Allah richly reward you for your generosity.”
Al-Ihsaan was established in 2007 and the Salagi Centre was built through a D4.7 million grant from Human Aid, a Muslim charity based in the UK. Of the 43 students at the Salagi school, 28 are orphans. In addition to memorising the Qur’an, the students are trained to commit to memory 15 other Islamic books. They are also taught Arabic and English.

Jawharr
Mahmoud Singhateh, the Principal of Jawharr Qur’anic Memorisation School and Orphanage in Wulingkama near Brufut, thanked Karpowership for the donation of the food items. He said the assistance could not have come at a better time for his 147 students, 52 of whom are orphans and 18 females. He said Jawharr, named after a fabled fragrant goblet in Paradise, attracts students from Mali, Guinea, Guinea-Bissau and Senegal (including Casamance). He said his school is free and that a philanthropist recently endowed the school with a 100 x 50 metre piece of land for which they are soliciting funds to develop. He prayed for God to bless Karpowership and noted: “If you take care of the children, you take care of the future.”

Madina Salam
Malang Saidy of Gunjur’s Madina Salam Orphanage and Centre for Qur’anic Memorisation also thanked Karpowership for the donation of the rice, oil, onion and bread. He said his centre was set up in 2014 and has a student roll of 52 and is managed by the Public Association for Helping Orphans & The Needy.

About Karpowership
Karpowership connected its 36 MW Karadeniz Powership Koray Bey to the Gambian national grid and started generating electricity on 2nd May 2018. This followed the signing of a power-purchase agreement with The Gambia Government through Nawec in February 2018. Karpowership’s fleet currently generates 3,100 MW in at least seven countries around the world. 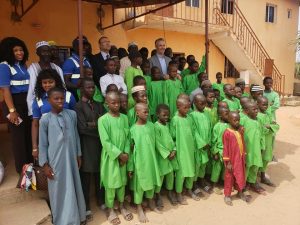 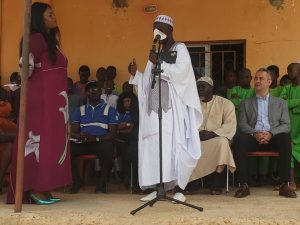 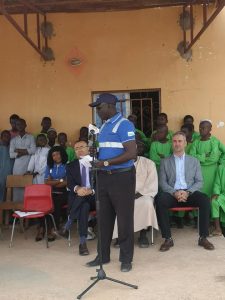