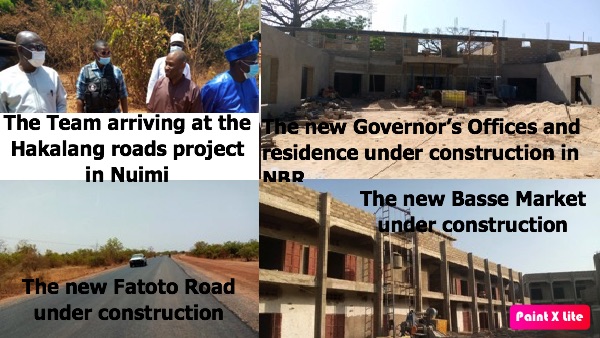 On 9th March 2021, Hon. Bai Lamin Jobe, Minister of Transport, Works and Infrastructure (MoTWI), headed a team of senior staff of his Ministry and Ministry of Finance and Economic Affairs to visit a number of on-going or completed infrastructural projects in the North Bank Region (NBR) and in the Upper River Region (URR).

All of the visited infrastructural projects were already executed or under execution, and are expected to improve the livelihood of people in the communities of NBR and URR.

The first stop of the team was at the Hakalang roads project in Nuimi in the NBR, which involves the construction of 86 kilometers of roads, which has started in earnest.

The project is expected to be completed in 26 months, and will cost about 1.2 billion dalasis, all to be funded by Government of The Gambia. The Hakalang, when completed, will provide vital access to the Lower and Upper Nuimi Districts, which have a combined population of over 70,000 residents.

The roads will connect the communities of Juffureh, Albreda, Kerr Mbuguma, Fass Omar Saho, Bafuloto and Kuntaya, which is in the Jokadu District. The Hakalang Project is also expected to yield numerous economic and social benefits within the area, especially in Agriculture, Fisheries and Tourism.

The contract for the Hakalang road works has been awarded to Campagnie Sahelienne d’ Entreprises (CSE) of Senegal. There were visible signs that the company is fully mobilized to the project sites and the earthworks are in full gear along the road.

From Nuimi -Hakalang, the team proceeded to the regional capital of NBR, Kerewan, where construction works for the Governor’s offices and residence are also progressing. The project, which is going to cost about 23 million dalasis, is expected to be completed in one year.

The next stop of the team was at the North Bank Rural Roads Project, which comprises of two lots: Lot 1 is awarded to Arezki Construction Company Limited, and it starts from Saba Sukoto to Bambali, Sarakunda to Ngayen Sanjal, covering a distance of 38 kilometers.

While Lot 2 which was awarded to CSE Company, starts from Kaur to Jimbala, Kaur to Kerr Uldeh and Kaur-Janneh Kunda to the Senegalese border village of Kerr Chaindu, covering a total distance of 48 kilometers.

These road projects, which are estimated to cost about 1.6 billion dalasis, are entirely funded by the Gambia Government. MoTWI and the National Roads Authority (NRA) are the executing agencies. PACE Engineering and GAMECS are the consultants.

The projects are expected to last 16 months, and their completion will be important additions to the national secondary roads network, thereby improving connectivity in the NBR.

In the URR, in Basse and Fatoto, the two Bridges are in near completion. The projects are funded by grants from the Government of The People’s Republic China.

On Saturday 20th March, 2021, The President, H.E. Adama Barrow, accompanied by the team, drove over the new Basse Bridge, constructed by the Chinese, and drove the entire length of the new Yorobawol road, constructed by Arezki construction company.

The touring party further visited the Fatoto road and bridges later in the afternoon. The Bridges and road project are expected to be completed in July this year.

At the Fatoto bridge where the tour ended, Bai Lamin Jobe, Minister of Transport, Works and Infrastructure had this to say, “because of the commitment of Government, we decided to use local funds to supplement these projects with additional works,” he said.

He further stated that deadlines for the projects, including the bridges, the roads, and the new Basse market under construction will all be completed on time.

“Roads are important and that is why government is doing all it can to address this deficit. We cannot do them all at one ago, but we will construct them in a strategic manner to address the constraint,” he concluded.

Meanwhile, in Basse, Gai Enterprise and Gigo Construction companies are rebuilding the new Basse Market at a cost of about 100 million dalasis for a period of eight months.

It could be recalled that last year, the entire Basse market was ravaged by a fire incident, which destroyed the market. There was a warm welcome of the President by a large crowd during his site visit at the market.

US Department of State releases religious freedom report on The Gambia