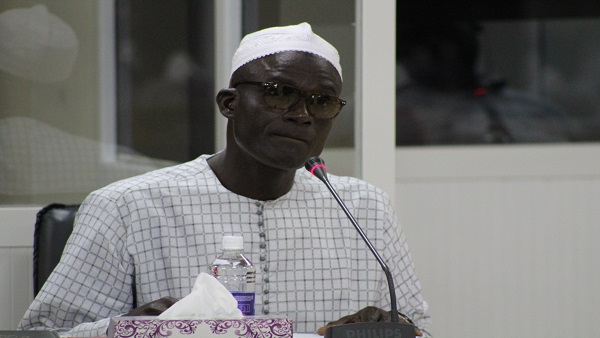 Warrant Officer Babucarr Njie, a former orderly and close bodyguard to ex junta vice chairperson Sana Sabally, yesterday denied involvement in the executions of detained soldiers in the aftermath of the November 11 attempted coup in 1994.
Njie was testifying at the TRRC where previous witnesses mentioned him to be part of orderlies who participated in the tortures and execution of arrested soldiers accused of planning a coup against the junta.

Njie, also known in the army circles as Ponkal, a giant, labeled himself as one of the ‘most disciplined soldiers’ in the army and categorically denied that he took part in the executions in Fajara, Yundum, and the Brikama forest respectively while serving as an orderly to Sana Sabally.

He however admitted taking part torturing some civilians who often obstructed the former junta vice chairman’s convoy.
The witness testified that only Sana Sabally indirectly fired at the detainees where they were lined up and told to say their final prayers at Fajara barracks.
Njie’s accounts of the events were so incredibly different from those of previous eye-witnesses that the Commission revisited testimonies of Ensa Mendy, Modou Lamin Bah, Alagi Kanyi and Baboucarr Mboob all of whom alleged that Njie participated in the shootings and executions of the detainees.

“I have no idea whatsoever about this execution and I am not trying to extricate myself from responsibility. I was never at the forest and I do not know either where the execution happened or who were behind it until I heard of them at the TRRC,” Njie stressed.
He continued: “Those who were saying I was there may not know my whereabouts at that time; they only presume that being an orderly to Sana Sabally I ought to be there while in actual fact, I was not there. I know where I was and when I came, the only time I knew about what has happened was the information I got from Baba Njie”.

According to him, the witnesses’ testimonies are not sufficient to confirm his involvement in the executions claiming that the people who testified against him were not physically present on the ground when the executions were taking place.
“If investigations continued I would be glad that it would exonerate me from these allegations of killings,” Njie concluded.