On government’s cluelessness and irresponsibility: The GACH arms saga Only a clueless and irresponsible government can come out of a dictatorial regime and issue firearms and ammunition importation licence to a company with an unmanageably large and diverse business portfolio 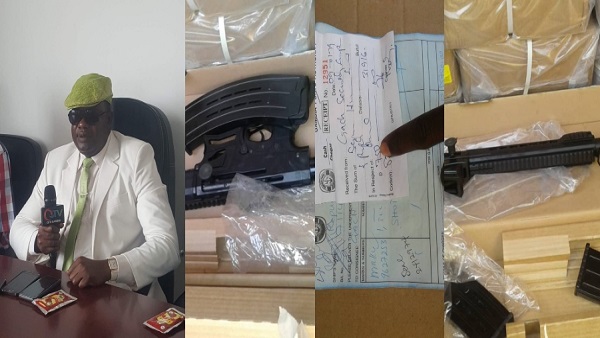 To me at least, the Barrow government does not have the imagination, intuitive capacity and agility to lead The Gambia. I have never known so many “investors” being interested in meeting the leader of a poor country such as they do of ours. It seems that one does not need much to present one’s business credentials to President Barrow. I think some of the “investors” must know that there is a piece of cake called The Gambia which is up for grabs and that with its lousy leadership anyone, literally anyone has a fair chance to claim a slice of whatever is left of the country’s resources. The leadership does not seem to read anything (if you need to know more about that, please read this piece by Dr Ousman Gajigo) or have the capacity to read into anything and it seems that one can sign any deal with them without any background checks. Thereafter, one seems free to do anything one wants – including environmental damage- without being subjected to regular and rigorous checks which can be conducted in the country by sufficiently trained, principled and honest individuals. For example, we recently witnessed a protest in Kombo Sanyang over the fishmeal factory (Nissim Fish and Fish Production Company), which the protestors claimed was destroying the tourism sector, their health and livelihoods. This suggests that the government has not learnt anything from the incident in Faraba Banta. Indeed, I wonder how issuing a licence to import firearms helps address some of these potentially explosive issues that seem to be of regular occurrence in the country.

I do not think it is unreasonable to revoke GACH Security Ltd’s licence to import firearms on the basis of what happened. Besides, I think that regardless of the outcome of the investigations, GACH Security Ltd must not be permitted to apply for any such licence in the future. Further measures should be that the Office of the IGP must not be permitted to issue firearms importation licence to any business for the foreseeable future without the full implementation of the much needed security reforms. In the meantime, President Barrow and his Interior Minister should whisper in the ears of the IGP these words: “Don’t issue anyone/business the licence to import firearms into the country” instead of wasting his time telling the youths during the opening of Youth Connekt that they must not allow anyone to make them turn against government. By the way, if you see nauseating gloom on the faces of President Barrow, Mr Mballow and other close associates of President who have regular contacts with dodgy businessmen, it may be because this story, if investigated thoroughly, may prove to be particularly poisonous and they know it.

We cannot conclude this article without addressing the need for our solicitors and lawyers to take their societal responsibilities seriously. Although the laws of The Gambia permit the control and export of arms and ammunition (The Arms and Ammunition Act CAP 21.01 of 1924), it is important that we do so in line with our responsibilities to society and our environment. Our environment is very, very fragile and needs protecting by no other but us. It is almost certain that a lawyer/solicitor was involved in the preparation of the firearms licence for GACH Security Ltd. The solicitor/lawyer may have decided to put the need to feather their nest before the security concerns of the country, which s/he cannot claim to be totally oblivious to. The lives (human or otherwise) the imported guns may destroy in the country or elsewhere are sacrosanct; these lives must only be snatched by the natural forces of nature, and not by a trigger. Moving forward, I think we all need to give this issue a bit more thought before we commit to applying for a firearms and ammunition licence on our own or on behalf of client(s).

Our law makers [The National Assembly members (NAMs)] must also consider reviewing the 1924 law that permits the importation of firearms into The Gambia. The Gambia today is vastly different to what she was in 1924 or 1953. It seems it was in 1953 when the Act was last amended, thus it seems to need reviewing. Given what we have been through over the last 22 years, it is my view that the time has definitely come to change the law because the current law is a threat to national security as it has permitted the control and importation of lethal weapons and ammunition into the country. Since we also know more now than we know then, this law does not address our environmental responsibilities; whatever wildlife we have now need protecting, not hunted and killed for any reason. Therefore, the NAMs must seek to review and revise this Act so that it not only reflects the times we live in now, but also serves our national interests well.

Finally, it is sometimes not too difficult to tell the character of an individual by the type of company they keep. The fact that the firearms appear to have been shipped from Turkey is a concern because I thought Turkey is our friend. So how should the Barrow government engage Turkey or Turkey businessmen in the future? I think issuing an importation licence to GACH Security Ltd with an already seemingly large portfolio of business interests was a terrible mistake. The Barrow government must quickly learn lessons from this and make the necessary security sector reforms to avoid this happening again. We seem to be lucky to impound this consignment of firearms this time around, but we are unclear what and if any consignment may have slipped. Without the necessary safeguards that are overdue, it is unclear to me how lucky we may be in the future. We remain hopeful that there may be some hope for #Neveragain, but we can only make it a reality if the leadership is imaginative, clued-up, agile and dynamic.

By Lamin Manneh What exactly is inclusive and equitable growth and what does it imply? As we have noted above, the past six years have witnessed...
Read more
Analysis

By D.A Jawo The abrupt resignation of the Attorney General and Minister of Justice Abubacarr 'Baa' Tambadou has hit this country like a thunderbolt from...
Read more
- Advertisment -