OPPOSITION WARNED NOT TO UNDERESTIMATE BARROW 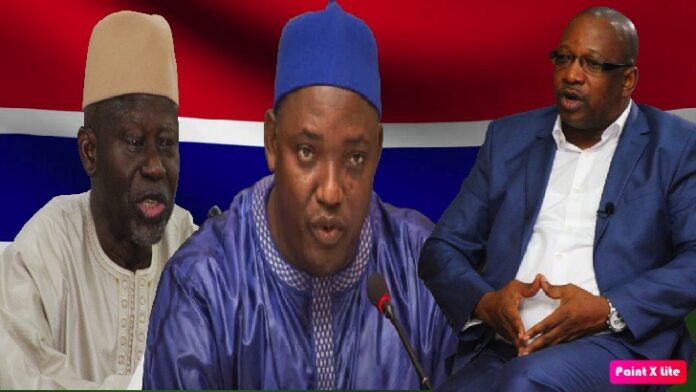 Lamin Keita, a Gambian PhD student at the North western University in the US, has warned the opposition against underestimating President Adama Barrow in the 2021 presidential election.

“I do not want to speculate, but there is substantive evidence that reveals that the failure of Gambia’s draft national Constitution to get to the referendum reveals two things. One, the elite interest would obstruct and kill Gambia’s nascent democratic transition, and that Gambians should not underestimate Barrow. He is a corporatist-strategist leader who is theoretically prepared to cling to power either by hook or by crook,” Keita told The Standard.

Keita said the “common characteristic across different political spectrums is that such leaders possess the ability to bend people to their will by using patronage and co-optation and other means. Political pundits, analysts, and scholars often consider Barrow as a rag-tag or rabble-rouser whose ambition would simply fizzle away.”

“However, the theory is that Barrow should not be treated as a political ‘efulefu’ because his political calculus is not mere rhetoric. Barrow captivates his followers by combining his political ideology with his perceived interpretation of Gambian politics where there is a distinct narrative of the relationship between the two for political influence.”

He said President Barrow has managed to skilfully exploit the cultural environment to defy the coalition agreement on three years and speedily moved to form his NPP while running the country as an independent coalition president.

“His government has an opportunity to provide a draft Constitution but used a far distant probe to kill it for his future political aggrandizement. His government engages in infrastructural building that might sound tangible to poor voters, but in reality, it is not bringing lasting forms of development,” he added.

All these narratives, Keita added, have silently proven that Barrow has an alluring and radicalizing influence that can weaken the nodes of the Gambian electoral process—to frustrate and dominate the looming strength of the opposition in the country.

“Now it is obvious to all that we create our own dictators or status quo. I would say to some degree that when Barrow came to power, he came with good intentions, likewise Jammeh, but we manipulate them into our political jingoism and dress them in apparel that does not realistically suit the aims and objectives of the country,” he said.

Keita further noted that Barrow maybe masked behind the advice of the arm-chair experts and politicians in order to extend the longevity of his political mandate.

“To conclude, the way forward for Gambia is that we cannot and must not accept elites whose agenda is to protect racketeers and refuse to protect the rights of every Gambian to participate in our democracy. Gambians should not wait for another dictatorship to reintroduce and impose itself on the citizens.

“Gambians have been patiently waiting for twenty-two years or more, and the time for waiting is over. In brief, I am convinced that the governing capacity of our country is gradually deteriorating. These governmental failures illustrate the grievances of a nation and the grave concern of many citizens. The harsh judgement of history will be on our acts,” he added.

“Many of us had raised concerns earlier about the abnormal framework of CRC and its exploitative cost to ordinary taxpayers which might be inconsistent with the stated mission. All these concerns raise the alarm and serve a moral vanguard for a responsive government to immediately remedy the absurdity and mystery that surrounds CRC’s work.

“Despite some of my reservations with the work of CRC, I think they must be credited for presenting a draft Constitution and the burden now lies on the arms of the government to ensure that such a draft is highly vetted before the National Assembly (NA) and to find its way to the referendum stage.

“It is true that the elites’ semantic distention clouded the work of CRC, however, the government could have worked on ways to remedy the situation through bargaining powers that would have fostered rapid coordination of the discussion in the NA. The government can explore pragmatic bargaining power to negotiate with its political opponents for the interest of the country’s burgeoning democratic process. This would have been a legacy for the Barrow government to be remembered by generations to come,” he said.

Share
Facebook
Twitter
Pinterest
WhatsApp
Previous articleTRRC admits meeting ex-NIA 8, denies inviting them
Next articleHer Excellency, the Vice President of the Republic of The Gambia speech on the occasion of the International day for disaster reduction 2020 THEME: “Target (e): Substantially increase the number of countries with national and local disaster risk reduction strategies by 2020”
Join The Conversation