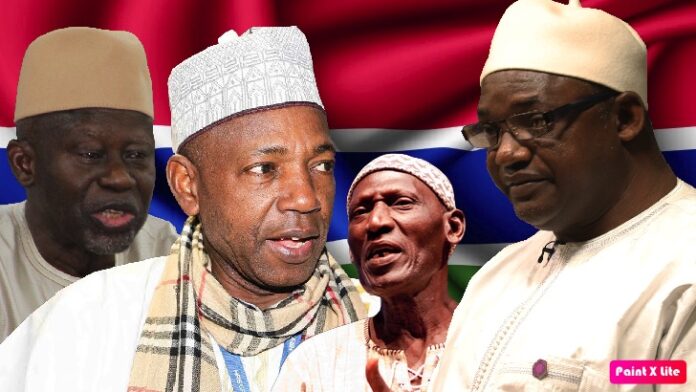 In the wake of the recent attacks and counter-attacks among some members of the country’s political leaders, veteran and former politicians have called on the leaders to avoid publicly attacking each other’s personality.

In the recent days and weeks, social and mainstream media have been filed with stories of bitter exchanges among prominent politicians, a phenomenon that worries a group of veterans who fear it could invite or encourage hatred among Gambians who follow different party leaders.

Among the incidents causing concern are Tourism Minister Hamat Bah’s alleged labeling of his fellow politicians as “dirimos” (rats); his comments about how Niani lacked development under former President Jawara; lawmaker Fatoumatta Jawara’s alleged derogatory remarks about UDP leader Darboe and the most recent media comments of Darboe and Sidia Jatta about each other.

Speaking to The Standard on these developments, Kalilou Singhateh, a former minister under the PPP government and the only surviving member of the 1961 constitutional talks and the 1964 independence negotiation in Marlborough House, London, said the language used by  political leaders in criticising each other is not only distasteful but “a threat to national unity”.

Singhateh, who is in his late 80s, is a former National Assembly member for Lower Baddibu, Minister of education, works and communication and health under Jawara. He told The Standard what is currently happening in Gambian politics is very bad and dirty.

“This is not what was envisaged or practised by the founding fathers of our independence. It is important that political parties start arguing on policies and stop insulting each other’s personality because that is very dangerous. It is important that all political leaders, especially Ousainu Darboe and President Adama Barrow avoid clashing or else there could be serious disunity after the December polls,” he said.

“I urge President Barrow to advise the likes of Fatoumatta Jawara against insulting Ousainu Darboe or another person in his (Barrow’s) presence and for Ousainu Darboe too to try as much as possible not to allow his supporters to insult Barrow in his presence. I am very worried that if these two parties continue like this until December, there will be political tension in this country. But again, President Barrow should have the qualities of Jawara to ensure he doesn’t get agitated very easily. Jawara was able to last long because he was very tolerant,” he added.

Meanwhile, also on the same topic, another former minister in both the Jawara and Barrow governments, Amadou Jallow, OJ, said: “It is high time we,  politicians, saw Gambia’s interest first because peace and stability of this country should take precedence over anything else. I want Gambians to look back in history and ask themselves where are the likes of JC Faye, the first person to establish a democratic party, Pierre Njie of the United Party, Garba Jahumpa of the Congress Party, Sir Dawda Kairaba Jawara of the PPP, Sheriff Mustapha Dibba of the NCP and Sheriff Ceesay of the PPA? These were great people but they are all gone but The Gambia is still here. So we are all going to leave The Gambia here. This is why it should be the responsibility of every political leader to preach peace because without peace there cannot be any development. What is happening in The Gambia right now is a surprise to me because during the era of the PPP, you will never hear people insulting each other. We were cousins.

For me, all those who used to contest with me in Serekunda, the likes of Sainey Jaiteh, Halifa Sallah and Pa Ndura are all my good friends; we used to sit together. We should not allow ourselves, after removing a dictator, to start creating a divisive political environment. If we do that, we will not be doing justice to the Gambian people.”

Fatoumata Jallow-Tambajang, a Gambian politician, credited for her leading role in the Coalition that ousted Jammeh, added her voice to the topic. Jallow, an activist who served as vice-president and minister of women’s affairs under President Adama Barrow, said: “I want to advise everyone, including the executive to take the maintenance of peace as a personal and collective responsibility. It is everybody’s constitutional right to belong to any political party but that constitutional right doesn’t give you the right to advocate for violence or hate because violence and hate only disunite a nation by breaking its social fabric and nobody should want to be part and parcel of that. Those who are engaged in hate speech in our political discourse are people who should have been in the lead in promoting peace. Political leaders must promote peace as people who want to govern. They need to serve as role models. People should be proud of being ambassadors of peace and not ambassadors of hate and discord. The elections are coming and to ensure it is conducted in a peaceful environment should be everyone’s business.”

Madam Jallow, who also served as an advisor to former president Dawda Jawara, said party leaders should exercise decorum when responding to opponents’ criticism of them without insuls.

“As chair of the coalition, I admit that we have made a lot of mistakes but those mistakes were bound to be made for us to grow as a nation. It is the first time in the history of the country that a coalition won elections. So we will have to learn from our mistakes and build on that to avoid future mistakes. We must all forget our political differences and see Gambia because if we see Gambia in everything that we do, we will make less mistake,” she concluded.